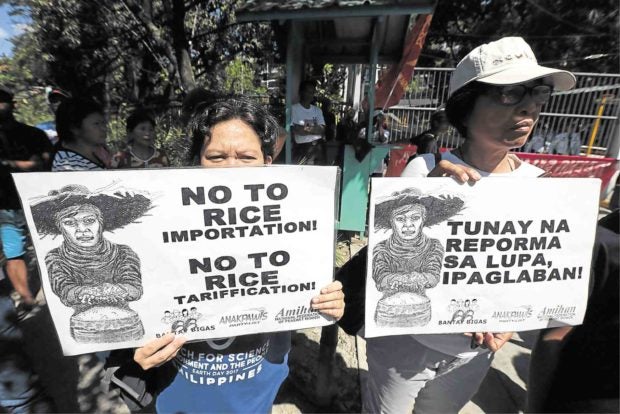 The economic research group Ibon Foundation on Tuesday warned that the rice tariffication law would neither improve the productivity of local farmers, lower the price of rice, or ensure a stable rice supply unless the government gave substantial support to agriculture.

The rice tariffication law replaces volume restrictions and allows unlimited rice importation, with a 35-percent tariff on rice imports from members of the Association of Southeast Asian Nations (Asean) and 50 percent from non-Asean countries.

It takes effect on March 5, with up to P11 billion in import duties expected to be collected during its first year of implementation, the Department of Finance (DOF) said on Tuesday.

Under the law, a P10-billion rice competitiveness enhancement fund will be taken from the tariff revenues to support Filipino farmers for six years.

But Ibon said the law could not control the global prices of rice or prevent possible price manipulation by domestic rice traders.

“Global rice prices are volatile and can become very high depending on the production conditions of exporting countries. Rice production [in] Vietnam and Thailand is subsidized and incentivized, making their rice cheap. But they can decide to prioritize local consumption and ban exports, making cheap rice unavailable to Filipino consumers,” Ibon warned.

Danilo Ramos, chair of Kilusang Magbubukid ng Pilipinas (KMP), also expressed concern about the Department of Agrarian Reform’s (DAR) “fast-track land use conversion” that, he said, would endanger the livelihood of those dependent on the country’s P360-billion rice industry.

The P10-billion rice fund would prove futile for farmers “if there are no more rice lands left after the accelerated conversion of agricultural lands proposed by [the] DAR,” Ramos said, adding that “rice farmers demand free land distribution and not land use conversion.”

But Malacañang has assured farmers that safeguards would be put in place to prevent the misuse of the fund, with the Department of Agriculture (DA) being accountable and responsible for it.

The DA, according to presidential spokesperson Salvador Panelo, would work with farmers cooperatives and groups to validate the list of beneficiaries.

The Congressional Oversight Committee on Agricultural and Fisheries Modernization will also conduct a periodic review of the fund, he added.

At a press briefing in Malacañang, DOF spokesperson Antonio Joselito Lambino II said “the implementing rules and regulations of the new law is being crafted to ensure that [there would be no corruption].”

Lambino said the rice fund would be used to improve existing infrastructure in the rice production sector.

Both Ibon and KMP are pushing for House Bill No. 8512, or the proposed Rice Industry Development Act, filed by Anakpawis party-list group that is asking for an annual allocation of P61 billion for three years, or a total of P183 billion, for the development of the rice sector.

Read Next
De Lima: I do my job in jail
EDITORS' PICK
House energy committee chair Arroyo bats for cheap electricity
Shop smarter with vivo’s big 12.12 holiday deals
The vivo Y02 is now available in the Philippines for only PHP 5,299
Hidilyn Diaz wins only gold missing from her collection
How not to retire as an ex-president
Lawmakers eyeing more changes in Maharlika plan
MOST READ
Jovit Baldivino, ‘Pilipinas Got Talent’ winner, dies at 29
Andi Eigenmann, family in Manila for a quick visit; Ellie dines with grandma Jaclyn Jose
LPA enters PAR, to likely strengthen into tropical depression in coming days – Pagasa
Lawmakers eyeing more changes in Maharlika plan
Don't miss out on the latest news and information.