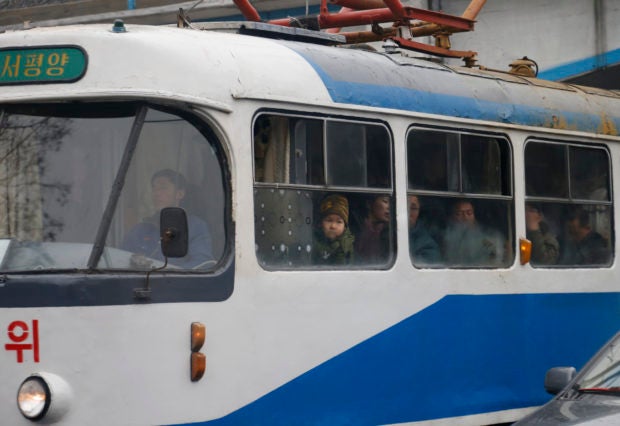 In this Sunday, Feb. 3, 2019 photo, people ride on a tram in Pyongyang, North Korea. Pyongyang is upgrading its overcrowded mass transit system with brand new subway cars, trams and buses in a campaign meant to show leader Kim Jong Un is raising the country’s standard of living. (AP Photo/Dita Alangkara)

The long-overdue improvements, while still modest, are a welcome change for the North Korean capital’s roughly 3 million residents, who have few options to get to work or school each day.

Transport officials say the capacity of the new trams is about 300, sitting and standing. Passengers must buy tickets in shops beforehand and put them in a ticket box when they get on. The flat fare is a dirt cheap 5 won (US$ .0006) for any tram, trolleybus, subway or regular bus ride on the public transport system. The Pyongyang Metro has a ticket-card system and the Public Transportation Bureau is considering introducing something similar on the roads as well.

Privately owned cars are scarce in Pyongyang. Taxis are increasingly common but costly for most people. Factory or official-use vehicles are an alternative, when available, as are bicycles. Motorized bikes imported from China are popular, while scooters and motorcycles are rare.

The subway, with elaborate stations inspired by those in Soviet Moscow and dug deep enough to survive a nuclear attack, runs at three- to five-minute intervals, depending on the hour. Officials say it transports about 400,000 passengers on weekdays. But its two lines, with 17 stations, operate only on the western side of the Taedong River, which runs through the center of the city.

“The subway is very important transportation for our people,” subway guide Kim Yong Ryon said in a recent interview with The AP. “There are plans to build train stations on the east side of the river, but nothing has started yet.”

The lack of passenger cars on Pyongyang’s roads has benefits. Traffic jams are uncommon and, compared to Beijing or Seoul, the city has refreshingly clean, crisp air. Electric trams, which run on rails, and electric trolleybuses, which have wheels, are relatively green transport options.

But mass transit in Pyongyang can be slow and uncomfortable.

The tram system, in particular, is among the most crowded in the world.

Swarms of commuters cramming into trams are a common sight during the morning rush hour, which is from about 6:00 to 8:30. Getting across town can take about an hour.

Pyongyang’s tram system has four lines. In typical North Korean fashion, one is devoted to taking passengers to and from the mausoleum where the bodies of national founder Kim Il Sung and his son, Kim Jong Il, lie in state.

The city’s red-and-white trams look familiar to many eastern Europeans. In 2008, the North bought 20 used trams made by the Tatra company, which produced hundreds of them when Prague was still the capital of socialist Czechoslovakia.

North Korea squeezes every last inch out of its fleet.

Red stars are awarded for every 50,000 kilometers (31,000 miles) driven without an accident, and it’s not unusual to see trams with long lines of red stars stenciled across their sides. One seen in operation in Pyongyang last month had 12 — that’s 600,000 kilometers (372,800 miles), or the equivalent of about 15 trips around the Earth’s circumference.

Ri Jae Hong, a representative of the Capital Public Transportation Bureau, told an AP television news crew the main tram route, from Pyongyang Station in the central part of town to the Mangyongdae district, is 21 kilometers from end to end. He said a tram might do the full route there and back on average six times a day.

By that reckoning, it would take just over 198 days of actual driving to win that first red star. /gsg