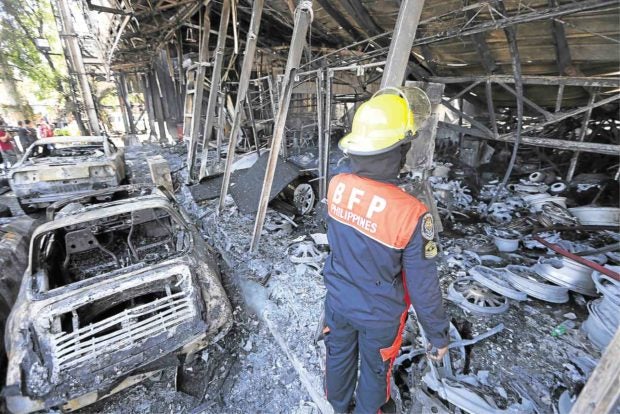 FIRE “VICTIMS” Only body frames and twisted, melted piles of metal are left of expensive vehicles and car parts after a fire engulfs an auto shop on Edsa, Mandaluyong City. —NIÑO JESUS ORBETA

Sen. JV Ejercito’s “lucky car,” or what was left of it, lay among the wreckage of Autoplus Car Center, a popular car shop on Edsa that was razed by fire on Monday morning.

In a tweet, Ejercito said he lost his Toyota Sequioa, which he had owned for over a decade.

“Feeling sentimental because we’ve been through so many battles and it was my most reliable, not to mention ‘lucky’ car. Will be missing this car,” he posted on Twitter.

In a message to reporters, Ejercito said he used the sport utility vehicle (SUV) in two elections.

He shared photos of his two vehicles at the repair shop. One of them, a Ford Everest, still bore his campaign posters for his reelection bid.

Ejercito’s SUVs, however, were not the only “casualties.” At least four other vehicles were gutted when the fire broke out in the Barangay Wack Wack, Mandaluyong City car shop.

The shop was situated on Edsa’s southbound lane near Connecticut Street. Photos and video footage taken by motorists of the thick, black plumes of smoke that confronted them at the famously clogged thoroughfare quickly spread online.

The Mandaluyong BFP said it was still investigating the cause of the fire. —With a report from Leila B. Salaverria