Co-ops hit bid to kill franchises, give new ones to big firms 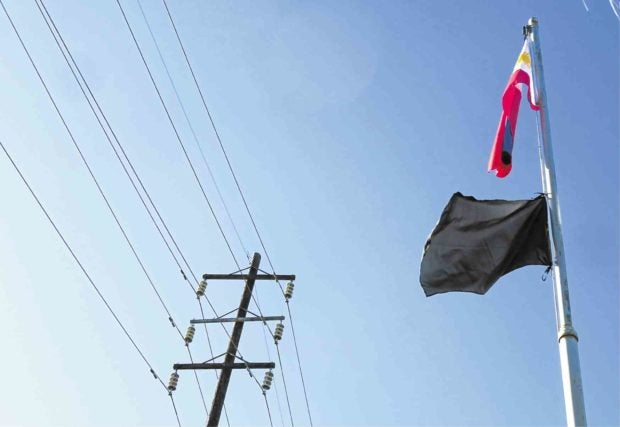 PROTEST COLOR Employees and officials of Palawan Electric Cooperative Inc. hoist a black flag below the Philippine flag in protest of a takeover bid by a new company. —SHANE FRANCES MONTECILLO

PUERTO PRINCESA CITY — At least 120 power cooperatives nationwide mounted what they said was a Black Valentine protest on Thursday to denounce an effort to undermine cooperatives in favor of big companies wanting to take over electricity distribution in the provinces.

The cooperatives, members of the Philippine Rural Electric Cooperatives Association Inc. (Philreca), said the Department of Energy (DOE) wanted to cancel franchises of at least 17 power cooperatives in what the group said was a preview of things to come.

Philreca did not identify the big companies planning to take over franchises of rural electric cooperatives.

But in Palawan, a campaign has surfaced targeting Palawan Electric Cooperative Inc. (Paleco) and allowing a new company, More Reedbank Corp., owned by ports magnate Enrique Razon, to take over.

On the day of the Black Valentine protest, Paleco employees and officials raised a black flag below the Philippine flag to dramatize their unrest.

Paleco is one of the 17 cooperatives listed by the DOE as problematic in its letter to Speaker Gloria Macapagal-Arroyo.

The letter, which the DOE said had been withdrawn, asked the House of Representatives to cancel the cooperatives’ franchises.

The Palawan provincial government had also written the House seeking the cancellation of Paleco’s franchise which was to expire in 10 years.

Aside from the letters, two congressmen — Frederick Abueg and Gil Acosta — filed a bill seeking to cancel the Paleco franchise and give a new franchise to Razon’s More Reedbank.

Jeffrey Tan-Endriga, Paleco board chair, expressed alarm over the campaign to cancel the utility’s franchise.

Endriga said Paleco was not to blame alone for the power problem in Palawan.

He said national government agencies, like the DOE, were not giving any support.

Endriga said should there be a new franchise to distribute power in Palawan, “it should be subject to a bidding process.”

Paleco is the second largest electric distributor in the country with over 130,000 customers. It had been ranked as an AA category electric cooperative by the National Electrification Administration (NEA).

Godofredo Guya, Dasureco general manager, said the letter of Energy Secretary Alfonso Cusi to Arroyo asking the House to cancel 17 franchises of cooperatives “did not go through due process.”

Only the NEA, he said, can make that recommendation.

Guya also said the cooperatives were protesting the huge budget cut for NEA which would threaten plans to energize all villages in the country.