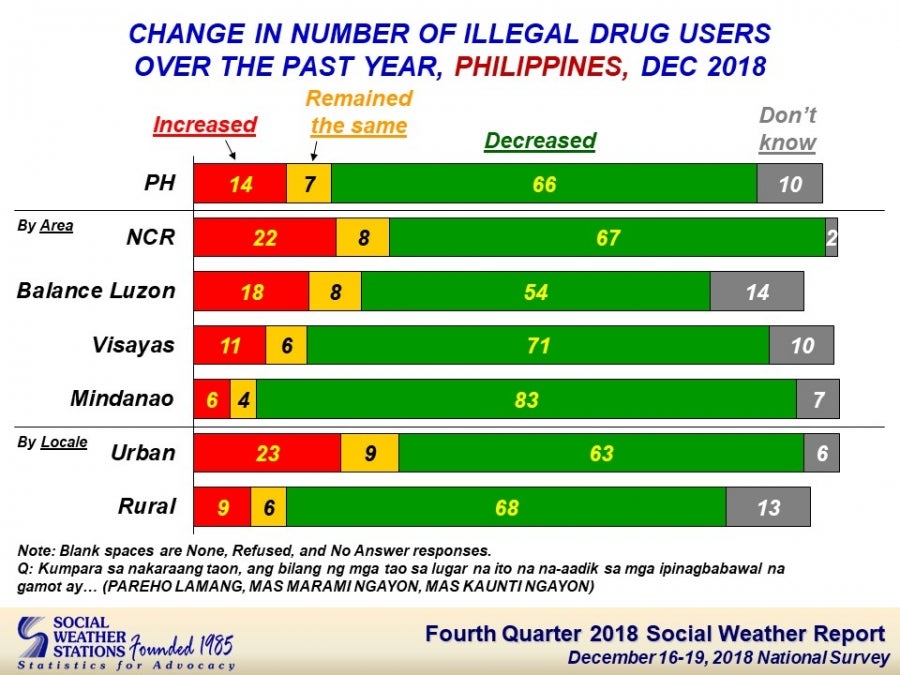 MANILA, Philippines — Majority of Filipinos said the number of drug addicts in their areas has decreased over the past year, a recent Social Weather Stations (SWS) survey result showed on Saturday.

In a survey conducted from Dec. 16-19, 2018, 66 percent of Filipinos said number of drug addicts in their areas has decreased while 14 percent said it increased and 7 percent said it remained the same.

Specifically, Filipinos who believe there are fewer drug users in their area was highest in Mindanao with 83 percent who said the number of drug users have decreased and 6 percent said it increased while 4 percent said it has remained the same.

The poll also found that most Filipinos said it is important that illegal drug trade suspects must be captured alive.

Meanwhile, 95 percent of Filipinos say it is important that illegal drug trade suspects must be captured alive with only 5 percent said it is not important.

The result was similar to the result of a survey done in June 2018 which recorded that 95 percent of Filipinos said drug suspects must be captured alive.

The survey result also showed that 87 percent of Filipinos believed that the police considers it essential to capture illegal drug trade suspect alive.

However, only 13 percent said police considers it not important to capture illegal drug trade suspects alive.

This was a point higher than result of a June 2018 survey which showed that 86 percent of Filipinos saying police believes it is important to capture drug suspects alive.

Respondents in the survey were 1,440 adults aged 18 years old and above. Of those surveyed, 360 each were interviewed in Balance Luzon, Metro Manila, Visayas and Minanao.

The survey had sampling error margins of ±2.6 percent for national percentages, and ±5 percent each for Balance Luzon, Metro Manila, Visayas and Mindanao.