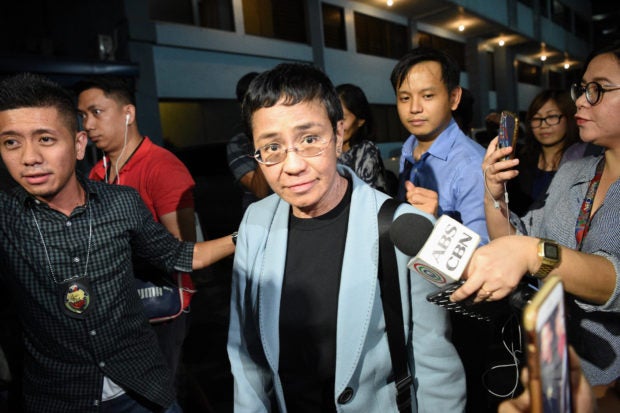 Philippine journalist Maria Ressa (C) is surrounded by the press as she is escorted by a National Bureau Investigation (NBI) agent (L) at the NBI headquarters after her arrest in Manila on February 13, 2019. – Ressa, who has repeatedly clashed with President Rodrigo Duterte, was arrested in her Manila office on February 13 in what rights advocates called an act of “persecution”. (Photo by TED ALJIBE / AFP)

MANILA, Philippines — The Alliance of Concerned Teachers (ACT) has called on the public to learn from history, citing the condition of the country during the Marcos regime.

“The Alliance of Concerned Teachers calls on the people to learn from the lessons of history. The arrest of journalists were reminiscent of the country’s experiences under Marcosian martial rule when journalists like Joe Burgos was arrested and incarcerated under similar circumstances,” the group said in a statement on Saturday.

The statement of ACT stemmed from the arrest of Rappler Chief Executive Officer Maria Ressa on Wednesday over a cyberlibel case. She was arrested at Rappler’s headquarters at around 5 p.m.

After spending a night at the National Bureau of Investigation headquarters, Ressa posted bail amounting to P100,000 before the Manila Regional Trial Court Branch 46 on Thursday morning.

ACT “condemns in the strongest terms” the arrest of Ressa, citing that it is part of a political repression on the critics of the government.

The group also tagged the arrest as a recent case of a human-rights violation in the Philippines.

“Ressa’s arrest was the most recent episode in the increasing pattern of state’s utter disregard to human rights in the Philippines. Teacher members of ACT were subjected to surveillance and harassment by police forces. Trumped-up charges were hurled against peace activist Rey Casambre that resulted in his arrest and incarceration,” the group said.

“Farmers were massacred in the hacienda in Sagay. NDFP Peace talks consultant Felix Randy Malayao was assassinated while he was asleep. Moro communities were bombed in Sulu and Marawi. Lumad schools in Mindanao were being systematically closed and the teachers and students were continuously harassed,” it added.

With this, the group said that President Rodrigo Duterte is evidently following the footsteps of the late dictator Ferdinand Marcos.

“The consolidation of crony positions and the broadening of the influence of the military establishment in governance were obviously patterned after the Marcos model. More than ever, the regime’s attempt at systematic historical revisionism to make martial law acceptable to the people was done with the assistance of his establishment media manipulators and social media sycophants,” ACT said.

ACT also warned that if Duterte would continue to repeat history, he may also face the same fate as Marcos’ when he was ousted by the people.

“The regime must be reminded that because of the repression that the people suffered during Martial Law under Marcos that the dictatorship crumbled unable to face the massive people’s uprising against the dictatorship,”