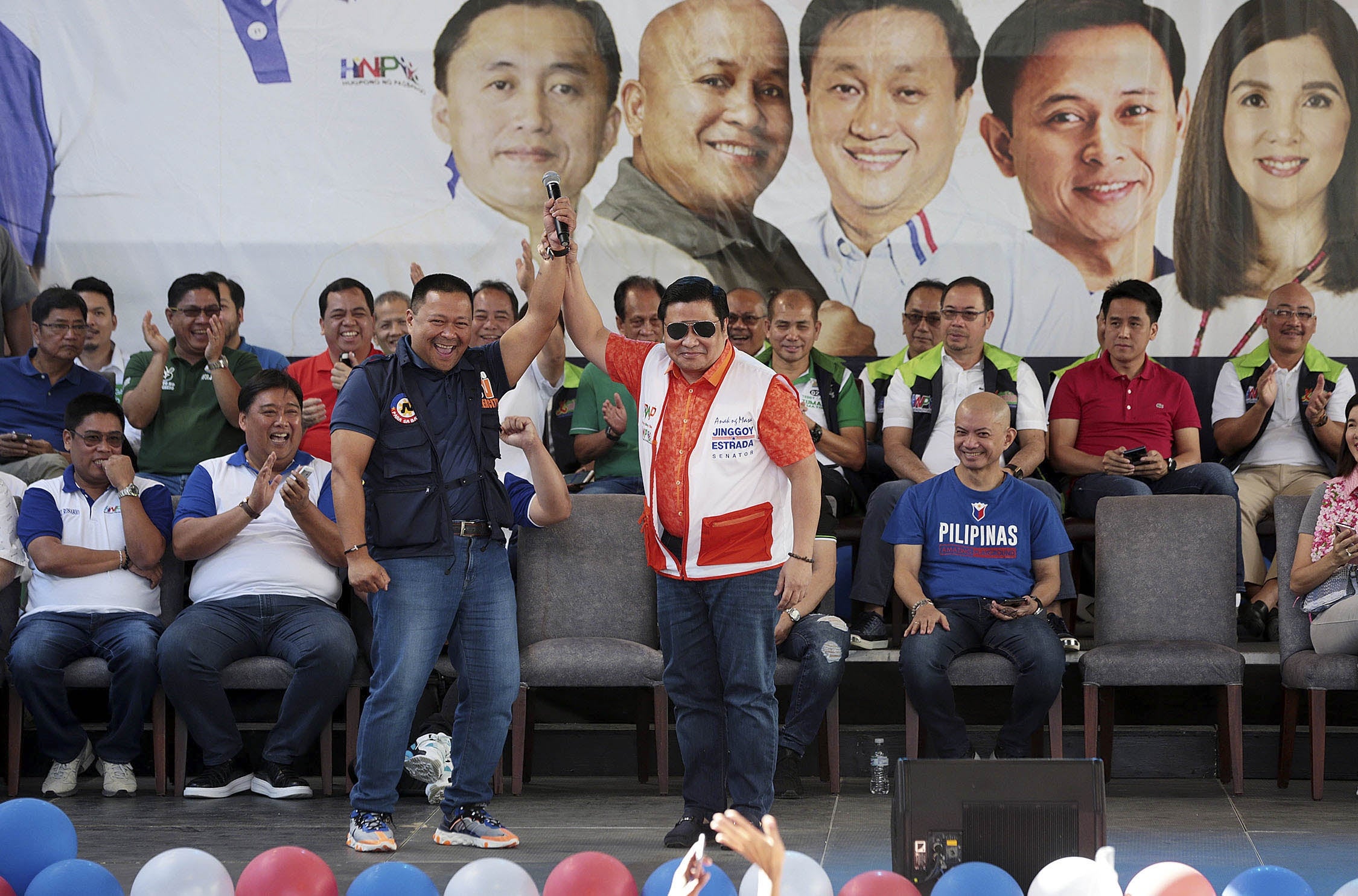 Reelectionist senators and those seeking to regain their Senate seats, many of them supporters of President Duterte, dominated the list of candidates likely to win in the midterm elections in May, according to results of the latest Pulse Asia survey released on Friday.

An independent, Sen. Grace Poe, remained on top of the list of 15 candidates with a “statistical chance of winning” if the elections had been held during the Jan. 26-31 survey period, Pulse Asia said.

Go, the former special assistant to the President, jumped from No. 16 in the Pulse Asia poll in December.

Sen. JV Ejercito fell from 14th place in December to No. 17.

Pulse Asia polled 1,800 adults nationwide. The respondents were asked to choose 12 from a list of 66 candidates that they would vote for. The survey was conducted before the Commission on Elections released its official list of 62 candidates.

The survey had a margin of error of plus or minus 2.3 percentage points.

Only 46 percent of the respondents said they already had a complete list of 12 candidates.

The voter preference ranged from 36.9 percent for those who voted for No. 15, Dela Rosa, to 74.5 percent who chose topnotcher Poe.

Pimentel, Go and Dela Rosa are three of the five candidates of the administration Partido Demokratiko Pilipino-Lakas ng Bayan party, of which Mr. Duterte is the national chair.

Villar, Angara, Marcos and Cayetano are among the party’s six guest candidates.

The seven “statistical” winners are among the 11 candidates endorsed by the President and the 13 supported by Hugpong ng Pagbabago (HNP), the regional party established by his daughter, Davao City Mayor Sara Duterte.

HNP also endorsed Estrada and Revilla, who are not among the candidates officially backed by Mr. Duterte.

The party on Friday brought its campaign caravan to Baguio City a day before the Philippine Military Academy (PMA) homecoming. About 6,000 alumni were expected to attend.

Duterte, however, said they would not stay for the gathering. She and the six candidates with her headed later in the day to La Union province.

The Armed Forces of the Philippines has disallowed political campaigning during PMA homecomings.

The HNP rally at the President Fidel V. Ramos Gymnasium drew only about 1,000 people and many of the seats that had been prepared for the crowd were empty.

“Thank you, Baguio City, for the warm welcome. This city supported our family during the 2016 elections,” Duterte told supporters.

This city was the fifth stop of the party’s campaign caravan since the official campaign period started on Tuesday. The HNP candidates have been to Pampanga, Bataan, Olongapo and Pangasinan.

In a statement from her cell at Camp Crame, she said they embodied “the abilities and readiness of the opposition to stand up and fight for the true issues affecting the country: poverty, injustice, the mockery of democracy and sovereignty, and social justice.”

De Lima said the coming elections “should neither be a popularity contest, a show biz bonanza, nor a public auction.”

“I pray for an outbreak of will and determination among us to drive away the politics of hate and the culture of fear and impunity that have engulfed our country for almost three years now,” she said. —WITH REPORTS FROM INQUIRER RESEARCH, JULIE M. AURELIO AND VALERIE DAMIAN