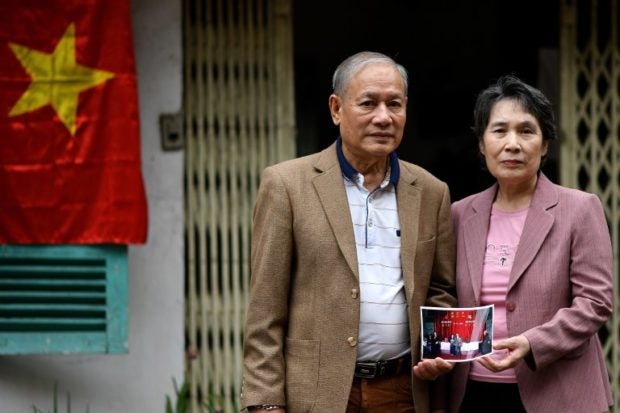 HANOI, Vietnam — A handkerchief, illicit letters and secret visits — the first three decades of love between a Vietnamese man and his North Korean sweetheart were counted out in stolen moments and small tokens of devotion.

But now this love story is being lauded as an example of the two countries’ amity in the lead-up to this month’s much anticipated second summit between US President Donald Trump and North Korean leader Kim Jong Un in Hanoi.

The communist state is thrilled to be hosting the high-profile event in Hanoi, an opportunity for Vietnam to boost its diplomatic gravitas on the world stage.

But for the couple, their hopes for peace on the Korean peninsula also carry personal motivations.

He first met his future wife Ri Yong Hui in 1971 at a Pyongyang fertilizer factory, where she was working.

Canh was one of hundreds of Vietnamese sent to fellow communist nation North Korea to study how their country could rebuild after the devastating war with the US.

“I asked others for her name, trying to meet her,” he said. “At that time, both Vietnamese and North Koreans were not allowed to love each other.”

His first token of affection was a handkerchief.

Their courtship included secret visits to her hometown, which were cut short in 1973 when he had to return to Vietnam.

Canh gave Ri 20 envelopes with his mother’s work address at the State Bank of Vietnam already written out so she could send letters, skirting North Korea’s monitoring of correspondence.

Still the couple sent only two or three letters a year to avoid notice. Mostly, they kept to safe subjects like health and work, in case the envelopes were opened by others.

“We were in love and she had even told me to die together, to commit suicide. But I told her, ‘We are in love, why die? Wait for me and I will come back.'”

As the years ticked by, he kept an eye on the two countries’ relationship, as Vietnam outpaced North Korea in economic growth.

Meanwhile, he set up a friendship club between the countries and organized fundraising to donate rice to the Korean peninsula as its leadership isolated itself from the outside world.

He also appealed to Vietnam’s Foreign Ministry, who brought the couple up in bilateral talks to their North Korean counterparts as “a humanitarian matter,” he told AFP.

He was allowed to return to Pyongyang to hold a small wedding ceremony and then take Ri back to Hanoi on the condition she remained a North Korean citizen.

Today, 70-year-old Ri says she has a good life in Hanoi where she lives with Canh in a modest apartment.

But the couple have managed to visit Pyongyang only three times because of its isolation.

“I always have my homeland on my mind,” she told AFP. /ee