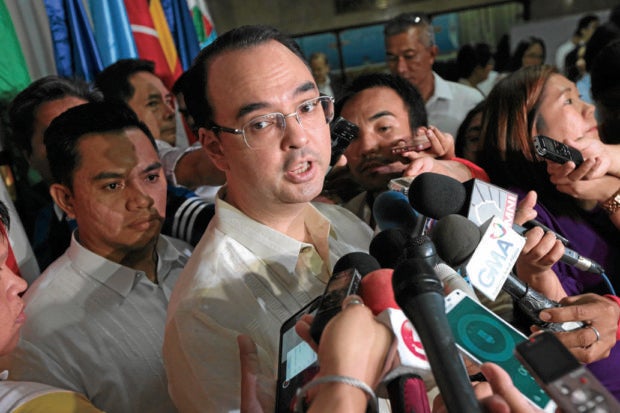 MANILA, Philippines–Despite delays from passing the budget and budget cuts from the Senate, Philippine Southeast Asian Games Organizing Committee (PHISGOC) Chairman Alan Peter Cayetano said that preparations for the country’s hosting of one of the biggest in the tournament’s history are on time and on target.

From the approved P7.5 billion, the budget for the Southeast Asian Games was reduced to P5 billion, slashing 33 percent from what was initially approved.

Cayetano explained that a careful study of the country’s hosting helped PHISGOC estimate that they could work within a minimum budget of P6.5 billion but not P5 billion. The biennial meet will happen from November 30 to December 11 in Clark, Pampanga, Subic, Batangas, Tagaytay, La Union and Manila.

The PHISGOC originally submitted a P9-billion proposed budget last year but the Department of Budget and Management only approved a P7.5-billion budget. The House of Representatives approved this amount but the Senate decided to reduce it to P5 billion.

To make ends meet, Cayetano asked for a week or 10 days so the committee can look for sponsors from the private sector to raise an additional P1.5 billion.

“As a Filipino, I won’t allow us to be embarrassed. So, we will find a way to ensure that our level of hosting meets international standards but also for them to see that despite this being the biggest SEA Games ever, with 56 games, 523 events and 29 venues, we want to be the best host. Here, we can show them our character as a gracious host,” Cayetano said during a news conference at the Kalayaan Hall of SM Aura in Bonifacio Global City, Taguig.

The former secretary of the Department of Foreign Affairs also explained that there is no delay in the planning and preparations of PHISGOC. Cayetano said the construction or repairs of  venues and facilities are 6 percent ahead of schedule.

“We win as one,” Cayetano highlighted the importance of unity and bringing people together. “Together, we can make this the most viewed and best hosted SEAG.”

“More than just investing in this year’s SEA Games, you are investing in our country, our people, and the development of our athletes. Not only Filipino athletes, but athletes of the Southeast Asian region,” said Ramirez in his speech.

Touted as the biggest SEAG in history, the 2019 edition will feature 56 sports and 523 events spread across 39 venues in Subic, Clark, Tagaytay, and Metro Manila. The organizing committee also assured that everything is on time and on target for the 30th SEA Games.

Cayetano expressed his gratitude to the Duterte government for its unparalleled support particularly for building world-class sports facilities, the first since 1938 when the historic 1934 Rizal Memorial Sports Complex was erected. /jpv