MANILA, Philippines — Veteran actress Susan Roces momentarily left her character as “Lola Kap” in the popular prime time show “Ang Probinsyano” to appear in a campaign rally on Wednesday and endorse the reeleection bid of her daughter, Senator Grace Poe.

People repeatedly chanted “Lola Kap” when Roces climbed the stage with Poe in the rally being held in Tondo, Manila. 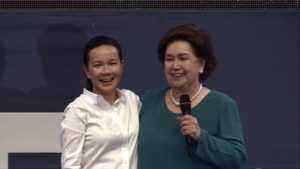 When the crowd started chanting “Lola Kap,” Poe reminded that her mother was not the one running for the May elections.

Aside from her mother, Poe also thanked her husband, Neil, and oldest son, Brian, for attending the event.

Only Aquino, the lone opposition member in the group, was absent from the rally. /je