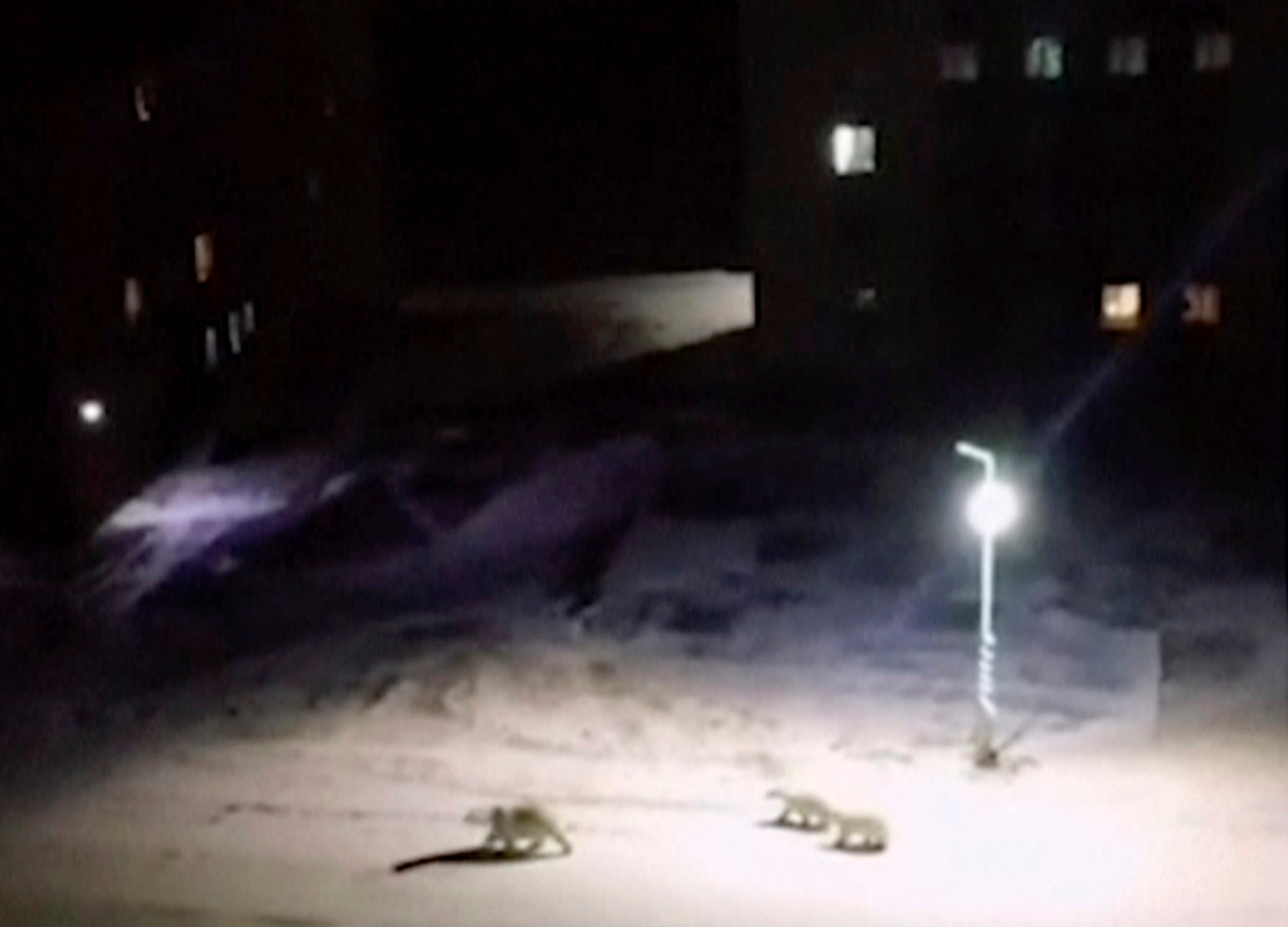 In this image taken from video, a mother polar polar bear and two cubs walk across the courtyard of a residential block, Monday, Feb. 11, 2019, in Belushya Guba, Novaya Zemlya, Russia. Russian wildlife specialists are heading to the Arctic archipelago to try to resolve why the polar bears have moved into the area. More than 50 bears have been spotted in the archipelago’s main town of Belushya Guba. (@muah_irinaelis via AP)

MOSCOW — Russian wildlife specialists are heading for an Arctic archipelago to try to resolve a situation that has both terrified and delighted the locals: the polar bears that moved into a populated area.

It’s not the first time that polar bears have come to Novaya Zemlya, but their numbers this time are striking. More than 50 bears have been spotted in the archipelago’s main town of Belushya Guba.

Regional authorities in Russia declared a state of emergency over the weekend after the bears peered into homes, entered buildings and gorged at a garbage dump outside the town.

Polar bears mostly live on sea ice, where they hunt seals as their main food. A decline in the seal population or the shrinking amount of sea ice as the Arctic warms might have brought them to land, experts have theorized.

Russian officials don’t have an immediate solution. Actions under consideration include relocating the dump that gives the bears a banquet and removing the bears. The scientists coming from the national natural resources agency will be equipped to sedate the bears and haul them away.

“That’s just an option; at the moment it is being considered, but there’s no 100-percent guarantee it will be applied,” said Alexander Gornikh, regional head of the natural resources agency.

The ferocity of polar bears may worry many people, but some are also thrilled by the spectacle.

Cell phone videos taken in the area come with sounds of humans exclaiming over bear sightings.

“Thank you! It’s so cool! We have seen polar bears,” one woman is heard saying after she spotted a female bear and two cubs. “Bye, baby, bye!”

The two islands that make up Novaya Zemlya are farther north than the most northerly city in the United States. That’s Utqiagvik, Alaska, previously called Barrow.