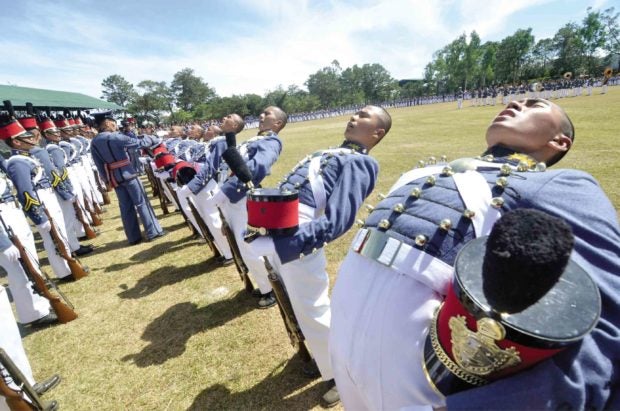 BACK TO THEIR ROOTS Graduates of the Philippine Military Academy are returning to Fort del Pilar in Baguio City, where their military careers started, for their annual homecoming amid the noise of the election season. —KARLSTON LAPNITEN

The Armed Forces of the Philippines chief of staff, Gen. Benjamin Madrigal Jr., on Tuesday said alumni, including honorary class members, of the Philippine Military Academy (PMA) would be barred from “engaging in political campaigning” during their annual homecoming this weekend at Fort del Pilar in Baguio City.

Among the PMA alumni who are running in the May midterm elections are Ronald dela Rosa (Class 1986) and Gary Alejano (Class 1995) for senator, and reelectionist Pangasinan Representatives Amado Espino Jr. (Class 1972) and Leopoldo Bataoil (Class 1976).

Madrigal said only activities related to the alumni homecoming would be held at Borromeo Field, the main venue of the activities on Feb. 15 and 16.

“As much as possible, honorary class members are requested to avoid campaigning, especially while in the hallowed grounds of the PMA,” he said.

“I would like to assure you that for this year, that will never happen because we are going to institute the corresponding safeguards to make the activity very sacred, very solemn and very important,” Delos Santos told reporters on Tuesday.

“Only PMA alumni are allowed to join the pass and review … Visitors can watch the parade from the grandstand,” he added.

As for campaign materials, such as streamers and stickers, he said: “I think the superintendent and the officials of PMA would never allow any political tarpaulins or gimmicks [at Fort del Pilar] because that would ruin the sanctity of our activity.”

He said welcome banners for PMA jubilarians and other alumni classes would be allowed at the camp or on roads leading to Fort del Pilar.

While the PMAAAI does not have jurisdiction over campaign materials that honorary members will post along the route to Fort del Pilar, Delos Santos said, “We discourage any political activity that will in any way compromise the importance of the homecoming.”

“We can only say it in a persuasive manner but we can never order because that is not within our jurisdiction,” he added.

According to Delos Santos, the PMAAAI board had stopped the practice of adopting politicians as honorary class members.

“Before, there were many government officials and politicians adopted as members. The PMA saw that it did not look good so a policy was initiated whereby we discouraged, in fact, stopped the practice of bestowing honorary membership, especially to those (personalities) from political parties,” he said.

This year’s PMA alumni homecoming’s guest of honor and speaker is Environment Secretary Roy Cimatu, a former AFP chief of staff and member of Class 1969.

The Department of Public Works and Highways (DPWH) will temporarily open Kennon Road to allow the public easy access to Baguio from Feb. 14 to 18 in time for the PMA homecoming, and from Feb. 22 to March 4, for the Panagbenga (flower festival) parades.

Public Works Secretary Mark Villar said this would help reduce the volume of vehicles using Marcos Highway during those days.

Villar, however, said only those traveling to Baguio would be allowed to use Kennon Road. Those returning to Metro Manila and other lowland provinces can take Marcos Highway, Naguilian Road or the Asin-Nangalisan-San Pascual- Tubao Road.

Kennon Road has been closed to the public since September last year due to the damage it incurred when Typhoon “Ompong” hit Benguet province. —With a report from Jovic Yee