Why Poe chose to be with Payatas kids on 1st day of campaign?

MANILA, Philippines—Why did reelectionist Senator Grace Poe spend the first day of the campaign with Payatas children, all of whom are not even voters?

Speaking with reporters after she distributed food packs to around 800 children from the Payatas Elementary School, Poe explained that it has been her advocacy to reach out and help those who are less fortunate.

READ: Poe kicks off 1st day of campaign with kids of Payatas 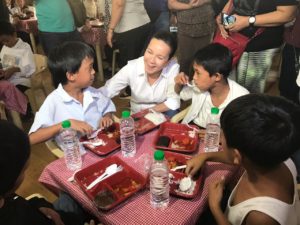 She also noted that she wants to remind herself of why she started running in the first place.

Poe, who is seeking reelection in the upcoming May elections as an independent candidate, kicked off her campaign with a school feeding program with the Payatas school children.

This is her first campaign-related event to boost her Senate bid.

On Wednesday, Poe and some reelectionist senators are also set to hold a campaign rally in Tondo, Manila. /jpv