CEBU CITY — This police officer wouldn’t want to miss the opportunity that the number three official of Philippine National Police (PNP) would be his godfather in his wedding.

Mandaue City Police Office (MCPO) director Sr. Supt. Julian Entoma and his wife, Socorro, ditched their plans to have a church wedding in 2022.

Instead, they joined the 15 couples who took part in a mass wedding inside the chapel of Camp Sergio Osmeña Sr., headquarters of the Police Regional Office in Central Visayas (PRO-7) based here.

The mass wedding, part of the PNP’s 28th founding anniversary celebration, was graced by Deputy Director General Archie Francisco F. Gamboa and his wife, Rozanne, who stood as godparents to the new couples.

Entoma married his wife in a civil ceremony in 1997.

After five children together, the couple planned to have a church “blessing” in 2022 in time for their 25th wedding anniversary.

But Entoma changed his mind upon hearing that Gamboa, PNP deputy director general for operations, would be one of the primary sponsors in the mass wedding.

Sinas also convinced Entoma, 55, to take part in the mass wedding since everything would be shouldered by PRO-7 – from wedding dress to reception.

Each couple received P5,000 to pay for their wedding gown and barong.

When the chapel doors opened for the traditional wedding march of the brides, 52-year-old Socorro was all smiles. 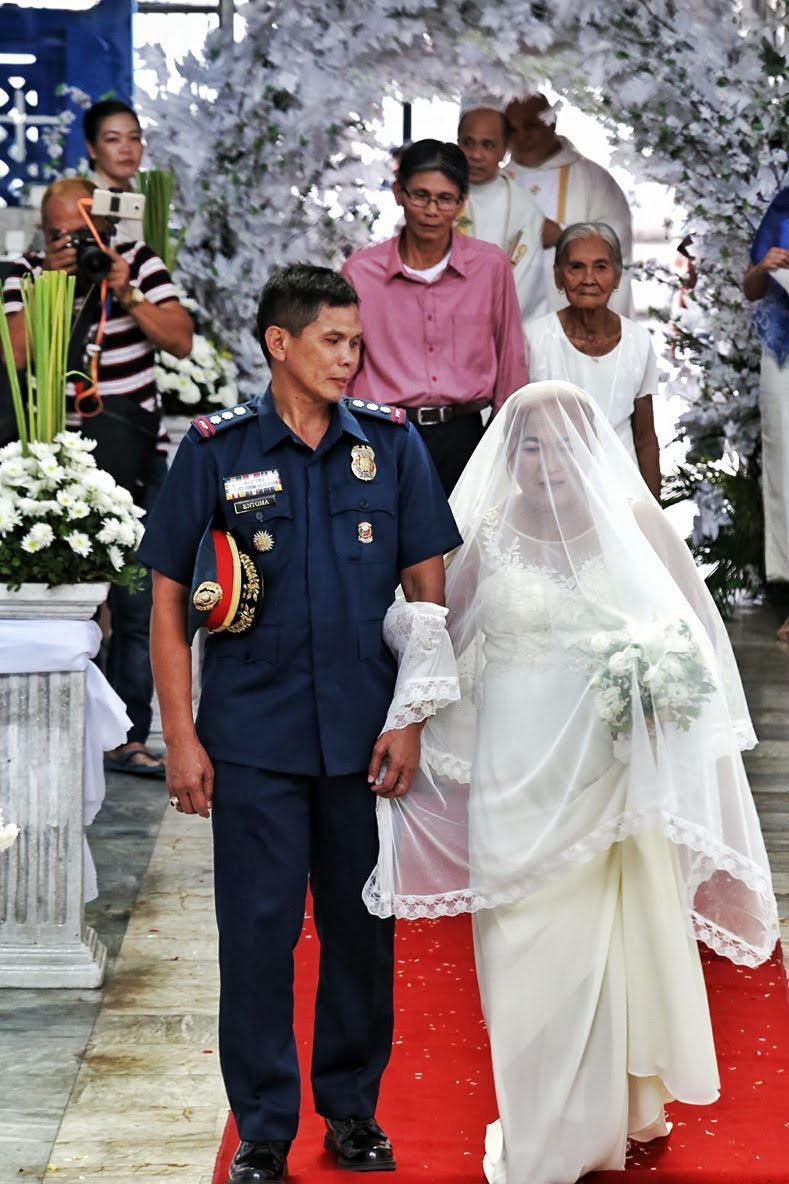 Mandaue City Police Office (MCPO) director Sr. Supt. Julian Entoma looks at his bride, Socorro, as they walked down the aisle during a mass wedding inside the Police Regional Office-Central Visayas headquarters. The mass wedding, participated in by 16 couples, is part of the Philippine National Police’s 28th founding anniversary celebration. Photo by Junjie Mendoza, Inquirer Visayas

“Syempre masaya… Love pa rin ko siya mula noon pa (Of course, I am happy. I love him ever since),” said Socorro, who looked radiant in her simple sleeveless white wedding gown that she got from a rental shop.

After the ceremony, couples proceeded to the quadrangle beside the chapel for the reception.

There was one table reserved for each couple where they were seated with their guests. On the table was a wedding cake.

Each couple was also given a gift certificate for a two-night stay at MJ Hotel and Suites in Cebu City for their honeymoon.

But for Entoma, honeymoon would mean staying in the hotel only at night since he had to report for work in the morning even if he was allowed to go on a three-day honeymoon leave by his superiors.

Even when the party ended at 2 p.m., Entoma left his bride and went to MCPO to work.

But it doesn’t mean he abandoned the love of his wife.

“I will be forever faithful to her,” he promised. /kga