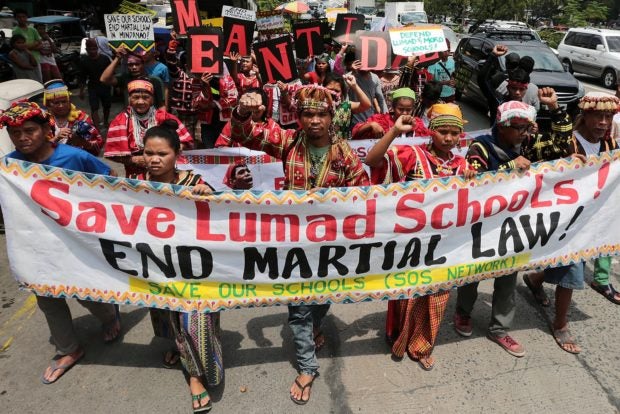 NO TO BOMBING OF ‘LUMAD’ SCHOOLS The UN Declaration on the Rights of Indigenous Peoples states that they have the right to “use, develop and transmit to future generations their histories, languages, oral traditions, philosophies,writing systems and literatures and retain their own names for communities, places and persons.” —INQUIRER FILE PHOTO

(Editor’s Note: Victoria Tauli-Corpuz, a Kankanaey native from the Philippines, is the UN special rapporteur on the rights of indigenous peoples and the former chair of the UN Permanent Forum on Indigenous Issues.)

The United Nations General Assembly has proclaimed 2019 as the International Year of Indigenous Languages (IYIL) and has called for its yearlong celebration.

As the IYIL website has pointed out, it is through language that we communicate with the world, define our identity, express our history and culture, learn, defend our human rights and participate in all aspects of society.

One of primary objectives of the UN declaration is to empower indigenous communities and to build their capacities in order to mainstream their indigenous knowledge systems and values within broader sociocultural, economic and political domains.

During the discussion leading to the adoption of the UN Declaration on the Rights of Indigenous Peoples, there was no question for us that the declaration should have an article affirming our right to speak and transmit our languages.

We ended up with Article 13 which said: “Indigenous peoples have the right to revitalize, use, develop, and transmit to future generations their histories, languages, oral traditions, philosophies, writing systems and literatures and retain their own names for communities, places and persons”  and that states should take effective measures to ensure that this right is protected.

Article 16 also talks about the right of indigenous peoples to establish their own media in their own languages.

One of the things which I remember about my father was him scolding us when we spoke another language other than our mother tongue, Kankanaey, in our house.

He was right as all of us, 10 children, ended up speaking fluently our own mother tongue.

Thus, when I started hearing and seeing the problem of languages becoming extinct and seeing the consequences of this, I truly appreciate the adoption of the UN General Assembly of Resolution No. 71/178 which proclaimed 2019 as the International Year of Indigenous Languages.

This is an important step in the protection and fulfillment of Articles 13 and 16.

During my term as the chair of the UN Permanent Forum on Indigenous Issues (2004-2009), we held an expert group meeting on indigenous languages which elucidated on this issue and came up with recommendations some of which are echoed in the resolution.

The brutal stories of how indigenous peoples are punished in schools, not just in residential or boarding schools but also public schools, whenever they speak their languages were shared in this meeting.

I, myself, experienced this during my elementary years in school, where we are fined for “speaking dialect.”

One would think that this is a thing of the past. However, these racist and discriminatory practices still continue in many places.

In performing my mandate as the UN special rapporteur, the violation of the right to one’s language is also an issue which is always raised to me during my country visits and through the communications sent to me.

The most common complaints are how indigenous children are discriminated against when they speak their languages and how indigenous languages are not used in schools and in public administration bodies, like in courts.

The indigenous peoples’ access to justice is very limited and one key factor is that there are no interpreters in the courts who can help them when their cases are heard.

In the Philippines, I also have visited many communities in Mindanao where “lumad” children stop going to school because they are bullied when they speak their own mother tongues.

I also observed that the measures taken by the government to address this issue of indigenous languages are very inadequate.

For instance,  while Congress has already legislated the use of the first language, or L1, in elementary education,  L1 use is actually limited to 19 languages and prescribed for the first three years only.

I therefore applaud the efforts of the indigenous peoples of the Philippines, especially in the Cordilleras, in addressing these issues.

I understand that they are spearheading the establishment of an IYIL2019 Philippines that will collectively plan and guide the yearlong activities throughout the country.

I hope that we will be able to get the government and other entities such as the private schools to contribute what they can to achieve the goals of the year.

I also wish to share with you the Action Plan for the IYIL which can be accessed in the Unesco website.