See that ‘pokpok’? The thrills and trills of UP bird-watching 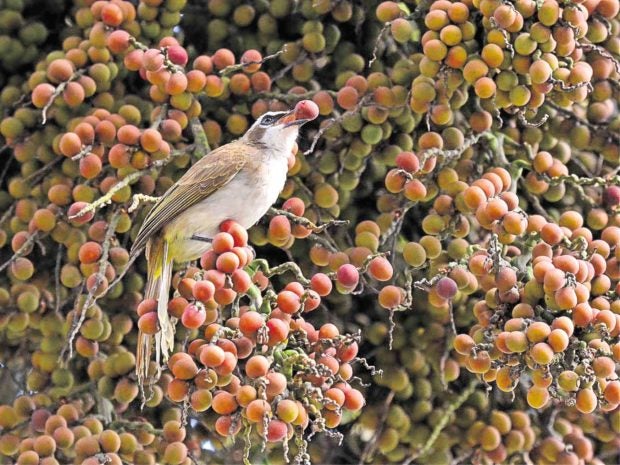 Against the setting sun on the University of the Philippines Diliman (UP) campus, two professors recount their recent encounters with birds.

A bird trill gives them pause. “Do you hear that?” Madrigal asks.

They listen intently, trying to name the winged creature making the sound.

“Bulbul!” they exclaim, giggling like schoolchildren amused with the bird’s name, which is similar to the Filipino term for pubic hair. The yellow-vented bulbul is a mainstay on campus.

Bird-watching, or birding, has become a popular pastime on UP Diliman, whose lush trees and shrubbery make it a natural habitat for birds.

For Aguila and Madrigal, birding is both an art and a science. Birders count and record the birds they come across because documentation is important to gauge the health of the environment.

Birds are like live barometers, says Madrigal, citing how mayas, scavenger birds common in Metro Manila, indicate the presence of a lot of garbage in an area.

“When we count and watch birds, when we document them, we help scientists and ornithologists correlate the presence and number of birds to the changes in the environment,” Madrigal adds. 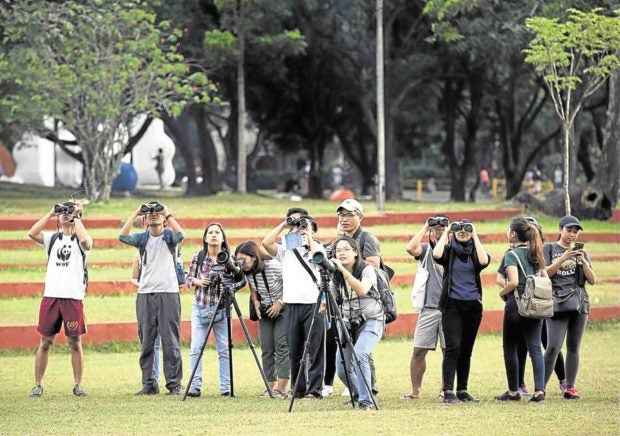 FOR THE BIRDS Birdwatchers at UP Diliman zero in on resident birds on campus.

The 473-hectare campus, one of the last green spaces in the urban landscape, hosts wetlands, grasslands, and mini forests, making it one of the few areas in the Metro where biodiversity can thrive. More than 100 species of birds can be found there.

Madrigal, a professor at the UP College of Human Kinetics, used to shoot birds in his province. He still does, but a camera has replaced his slingshot and rifle.

He had a change of heart when he noticed that the birds he was shooting were slowly disappearing. Seeing how their habitats had been degraded, he decided to document what he was seeing. He later offered bird-watching as a course that students can take as part of the physical education requirement.

“The students began to appreciate birds more. They learned how to identify them. They also realized that the birds they saw in pictures can be seen on campus,” Madrigal says.

Students, too, began sending messages to Madrigal’s group about the birds they’ve seen, allowing the birders more opportunities to photograph different bird species at UP.

“I hope my students would also be able to raise awareness on the degradation of the birds’ habitats on campus,” Madrigal says.

For Aguila, a professor at the UP Department of Filipino and Philippine Literature, combining birding and his love for poetry and photography comes easy. His eagle eyes give him an advantage when it comes to taking snapshots.

One of his favorite birds is the blue rock thrush, a regular on campus. He recalls stopping in the middle of a lecture and picking up his camera to immortalize the bird in bold blue feathers that was perched on a tree just outside the window of his fourth-floor classroom in Palma Hall.

Another campus regular is the Philippine scops owl, with its piercing eyes and brown coat. Also commonly found near Palma Hall, it is an immediate attention-getter as it sweeps into classrooms. 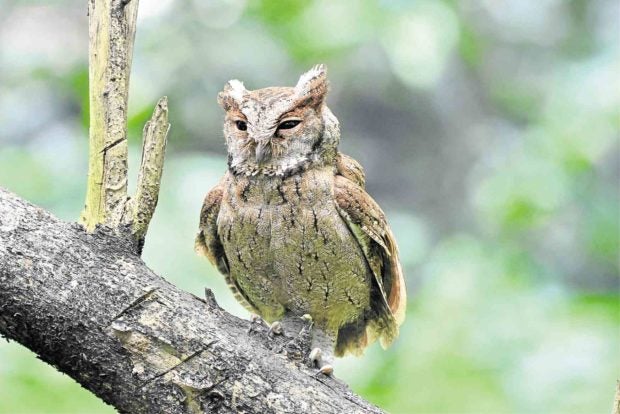 Headbanger!On a bright Saturday morning, bird enthusiasts gathered at UP Diliman’s Quezon Hall for a nature walk organized by the Wild Bird Club of the Philippines and UP Wild, which posts photos and anecdotes of campus wildlife on its Facebook page.

Using binoculars, the group initially had a hard time spotting the birds. Most feathered creatures in urban landscapes are small, to be able to adapt to and survive in the Metro.

But at the first stop, there was the black and white pied triller, its white-lined eyes unmistakable, perched on a tree just behind the Oblation.

The trees surrounding the UP Lagoon seemed to be the favorite hangout of the Philippine pygmy woodpecker, also known as the campus carpenters.

“Headbanger!” a participant exclaimed, noting how the bird seemed to be jamming to a heavy rock song while pecking at trees.

Just behind the Main Library, among several marshy ponds on campus, a wagtail flaunted its gray and yellow feathers. Birders dub it the twerker, because it shakes its tail while strutting around.

The Philippine hanging parrot, noteworthy for its “sisisisi” tune, is endemic on campus and is known for parading its vibrant plumage of green and red while singing.

“Pokpok!” the guide yelled, startling the group with the Filipino slang for “prostitute.”

They turned to see a coppersmith barbet, with a red patch on its chest that looks like a bleeding heart.

Unmistakable for its distinct pokpokpok trill, the bird drills holes into trees to make nests.

Passing the newly minted Philippine Genome Center in the UP College of Science complex, the group came across the resident long-tailed shrike, so tiny one is bound to miss it without binoculars. The handsome bird seemed to be showing off to its audience, twirling to allow photographers various angles.

At the last stop, grey-rumped swiftlets soared above the UP Math building, looking exactly like the small letter M that kids always draw to represent flying birds. Swiftlets feed while in flight, which means they are up in the clouds most of the day. 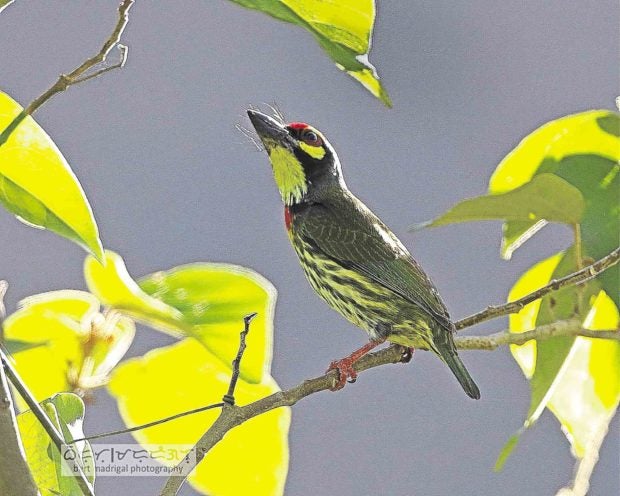 Every creature has a unique role in the ecosystem, explained Jelaine Gan, moderator of UP Wild and an instructor at the UP Institute of Biology. Birds feed on insects, such as caterpillars, flies, and mosquitoes, which help regulate their populations, she said.

“Seeing or hearing birds makes me feel relaxed. The student community can benefit from this stress-relieving activity,” Gan said.

The presence of birds indicates a healthy environment, said Mads Bajarias of the Wild Bird Club of the Philippines. If birds suddenly disappear, something has gone seriously wrong, she said.

“A lot of education” is needed to nurture the relationship between birds and the UP community, Bajarias said.

Gan, a longtime birder, said she hoped that regular nature walks would cultivate people’s care for birds and the environment. “Birds are beautiful and colorful in both appearance and song, so they’re a sure way to make people care,” she said. “People need to appreciate something first before they become protective of it.”

To raise awareness and showcase Philippine biodiversity, the Office for Initiatives in Culture and the Arts, along with the Asian Institute of Tourism, will launch Lakad Gunita, themed walks on campus in line with the celebration of UP Diliman Month.

Part of the event is a bird-watching walking tour, aptly called #Huni (birdsong) and set every Monday on Feb. 11-March 31, from 6 a.m. to 9 a.m. Assembly point is UP’s Marine Science Building.

“The community of UP Diliman should be informed about and attuned with the blessings of nature that surround them … There is another life surrounding us and we have to be able to explore it,” explained RJ Manalo, project coordinator of Lakad Gunita.