DOH pushes for compulsory vaccine shots; Malacañang shoots it down 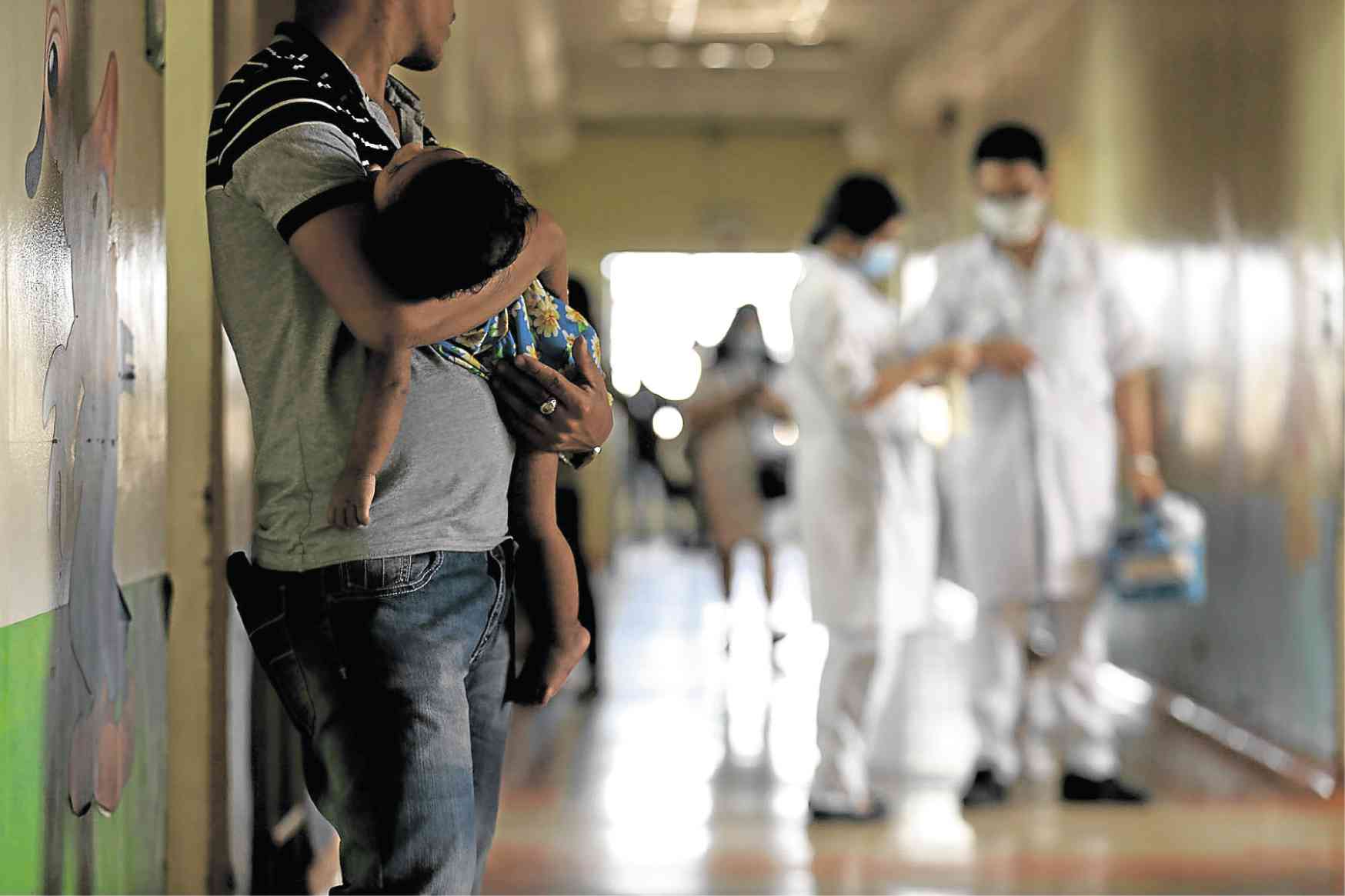 QUICK-SPREADING VIRUS A father waits for his measles-stricken child to be admitted to the pediatric ward of San Lazaro Hospital in Sta. Cruz, Manila. The Department of Health has declared a measles outbreak in Metro Manila and in four other regions. —RICHARD A. REYES

The Department of Health (DOH) on Friday pushed for mandatory immunization of children in the wake of a measles outbreak but a senior Malacañang official said this was not necessary and the proposal could face legal challenge.

Health authorities have given varying figures for the number of measles cases and fatalities, including 60 deaths as of Friday morning at San Lazaro Hospital in Manila.

He said the main target for vaccination this time was measles because it was very contagious and could quickly spread.

“There is yet no law [for mandatory vaccination] but this is something that merits serious consideration,” Duque said.

“I think it might be questioned before the courts somehow,” he said.

Nograles said President Duterte had already agreed to a “more aggressive action” to deal with the measles outbreak after he directed Duque on Wednesday to conduct a “vigorous” campaign to promote “complete immunization” of children.

Duque said Executive Order No. 663, issued by former President Gloria Macapagal-Arroyo in 2007, directed the Department of Education to “ensure the complete vaccination status of all children entering primary school” but did not provide sanctions for noncompliance.

He said he hoped that as the public saw the effect of avoiding vaccination, parents would have their children inoculated not only to protect them from diseases but also to improve a community’s collective immunity.

“At least you should have a sizable number or segment of the population that will be protected so that you begin to build a wall around the people who have not been vaccinated for a myriad of reasons, may it be religious or customary,” he said.

The DOH Epidemiology Bureau, which conducts disease surveillance, said that as of Jan. 26, there were 441 measles cases and five deaths in NCR.

On the other hand, the epidemiology department of San Lazaro, a referral hospital for infectious diseases, reported 1,629 measles patients, mostly children as young as 2 months old, as of Friday. It said 60 had died, all of them children under 4.

The measles cases at San Lazaro now total more than half of the 2,654 cases it had for the whole of last year.

The DOH and San Lazaro have yet to reconcile their figures.

The DOH office in Calabarzon reported five more deaths, raising the fatality figure in the region to 14 from Jan. 1 to Feb. 8.

The Bicol regional office on Friday said Masbate and Sorsogon provinces each recorded one death due to measles out of 55 cases so far this year.

The sharp increase in measles cases and deaths prompted senators to call on the public to get children vaccinated.

“To the parents, let’s not take the health of our children for granted. Let’s have them inoculated before the outbreak of measles worsens,” Sen. Richard Gordon said in a statement.

Ejercito also called on the DOH to ensure availability of anti-measles vaccines for mass immunization and to make emergency procurement if necessary.

Duque said health officials were “very frustrated” with the outbreak despite their warnings that the “Dengvaxia scare,” which he had blamed on the campaign against the dengue vaccine led by Public Attorney’s Office chief Persida Acosta, would lower confidence in vaccines.

Without referring to Acosta by name, Duque said the “drama that they were doing … really caused a damage to the integrity and effectiveness of the DOH to conduct and ensure that there will be adequate immunization coverage so that [the public] will be protected from vaccine-preventable diseases.” —WITH REPORTS FROM MARLON RAMOS, MARICAR CINCO AND REY ANTHONY OSTRIA