Pope Francis offered $1M for charity if he goes vegan 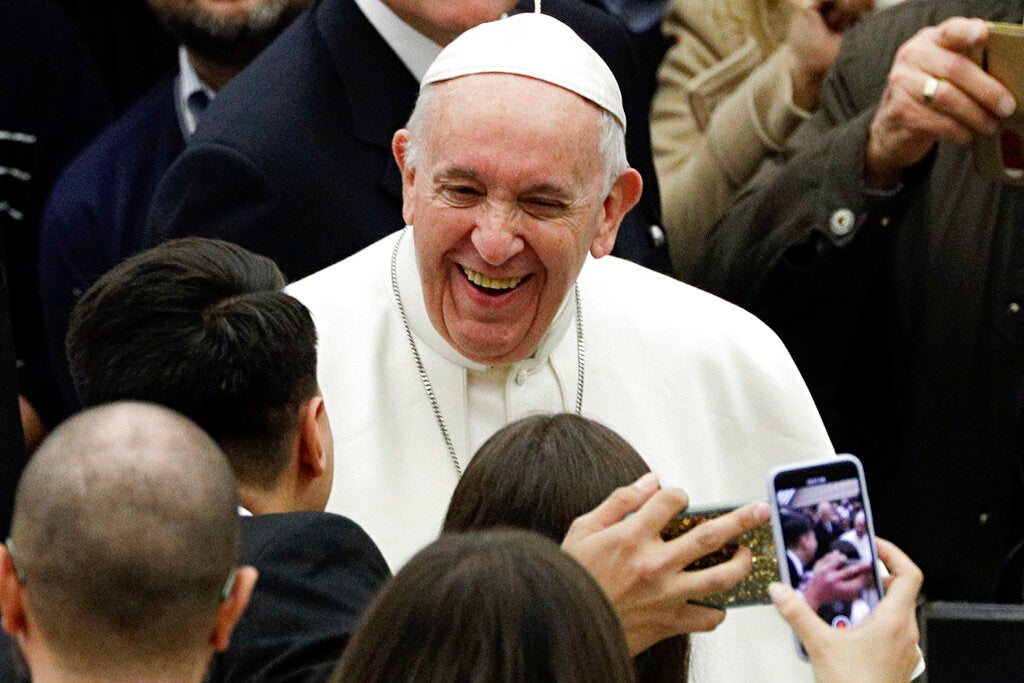 Pope Francis smiles as he arrives in the Paul VI hall on the occasion of his weekly general audience at the Vatican, Wednesday, Feb. 6, 2019. (AP Photo/Gregorio Borgia)

PARIS—A 12-year-old animal rights and climate campaigner made an offer on Wednesday Pope Francis may find hard to refuse: Eat vegan during Lent and a million dollars will go to a charity of the Pontiff’s choice.

“Your Holiness, we must act,” Genesis Butler, already a veteran activist when she gave her first TedX talk at the age of 10, said in an open letter supported by former Beatle Paul McCartney, film legend Brigitte Bardot, and dozens of minor celebrities.

“Moving toward a plant-based diet will protect our land, trees, oceans and air, and help feed the world’s most vulnerable,” Butler said.

“Today, Pope Francis, I am asking you to join me in abstaining from all animal products throughout Lent,” the 40 days of penance and fasting before Easter Sunday observed by Catholics, Anglicans and Orthodox Christians.

Butler’s letter reflects three social movements that have converged into an increasingly insistent call to eat less or no meat.

Climate scientists have shown that the way food is currently produced, distributed and consumed worldwide generates 25 to 30 percent of planet-warming greenhouse gas emissions.

Cattle production alone accounts for more than half of those gases, in the form of methane-laden flatulence, and carbon dioxide released when forests, especially in the tropics,  are cleared to make room for livestock.

While the Pope is known to live a frugal lifestyle, his meat-loving homeland Argentina is the world’s second-biggest consumer of beef per capita.

A major study last month calculated that only a stringent plant-based diet with vastly reduced meat portions compared to current levels of consumption, especially in rich nations can feed the 10 billion people projected to inhabit the planet in 2050 without wrecking the environment.

“With 815 million people suffering from malnutrition, imagine how many hungry people we could feed across the world if we moved away from such wasteful diets,” Butler said in the letter, written jointly with the Million Dollar Vegan nonprofit campaign.

At age 8, the young Californian joined the ranks of animal welfare advocates, most of whom foreswear meat or meat products.

Vegans take things a step further, avoiding dairy, eggs or any other foods that, they say, may entail animal suffering.

Finally, the campaign highlights the health benefits of a diet based mainly on veggies, fruits, grains, legumes and nuts.

A global epidemic of obesity with some 2 billion people eating too much of the wrong foods is driving higher rates of heart disease, diabetes and, most likely, some cancers.

Thunberg’s appeals have sparked sporadic student strikes in Europe and the United States to highlight the urgent need to deal with global warming.

The Million Dollar Vegan campaign is led by the US-based Blue Horizon International Foundation, which pledged to put up the 878,000 euros if the Pontiff says yes.