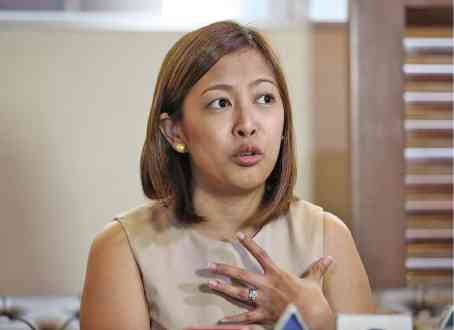 Makati Mayor Abby Binay on Wednesday kicked-off the citywide distribution of ‘Air Binay 2.0’ rubber shoes at the Francisco Benitez Elementary School and four other schools for some 6,000 students from Kinder to Grade 6 and SPED classes, who received their new pair of rubber shoes provided for free by the city government.

The mayor said that true to her promise, a new and better version of the shoes, dubbed ‘Air Binay’ by netizens on its launch a year ago, is now available to around 90,000 students from Kinder to Senior High School and SPED classes in the city’s public schools.

“The welfare of our youth will always be a priority of my administration. We will continue to expand the programs on education that my father started several years ago. Our goal is to promote a worry-free environment where students can concentrate on their studies, and acquire the knowledge and skills they need to become globally competitive individuals,” Mayor Abby said.

The mayor revealed that in the coming school year, the city government would be distributing new school socks for free to the students. “For as long as we have the financial means, we are willing to pull out all the stops to ensure that our students have everything they need so that all they have to do is study and learn and become the best that they can be,” she vowed.

The new pair of rubber shoes is among the items added by the current administration to Makati’s Project FREE (Free Relevant Excellent Education) that provides free school supplies and uniforms to public schoolchildren. Other items recently added include new raincoats and rain boots, anti-dengue kits, and dental and hygiene kits.

Some of them who were interviewed by the city information office during the distribution expressed a mixture of delight, excitement and gratitude.

Marie Antonette Dumindin of Jose Magsaysay Elementary School pointed out that the gray rubber shoes will not easily get soiled, and thanked the mayor for providing things that are useful for her and her classmates. “Hindi po sya dumihin at saka maganda po sya tignan,” she remarked.

Another student from the said school, Rob Darwin Ramos, said he was happy to receive his new pair of rubber shoes. “Masaya po ako dahil may bago na akong rubber shoes,” he said.

Aside from additional items to Project FREE, Mayor Abby also initiated new projects in line with her vision of “globally competitive Makatizens” emerging from the city’s public education system. Among these were free tutorials in mathematics, work immersion programs for senior high school students and SpEd learners, and free educational trips to famous sites that include Kidzania, Manila Ocean Park, and Mind Museum.

To promote inclusivity, Mayor Abby also pushed for the launch last year of SPEED for SpED, a training program for SpEd learners aimed at increasing their productivity and employability. Its first batch of beneficiaries composed of 150 SpEd learners received transportation and meal allowances while attending skills training in Makati’s public senior high laboratories, and during work immersion proper with industry partners and City Hall.