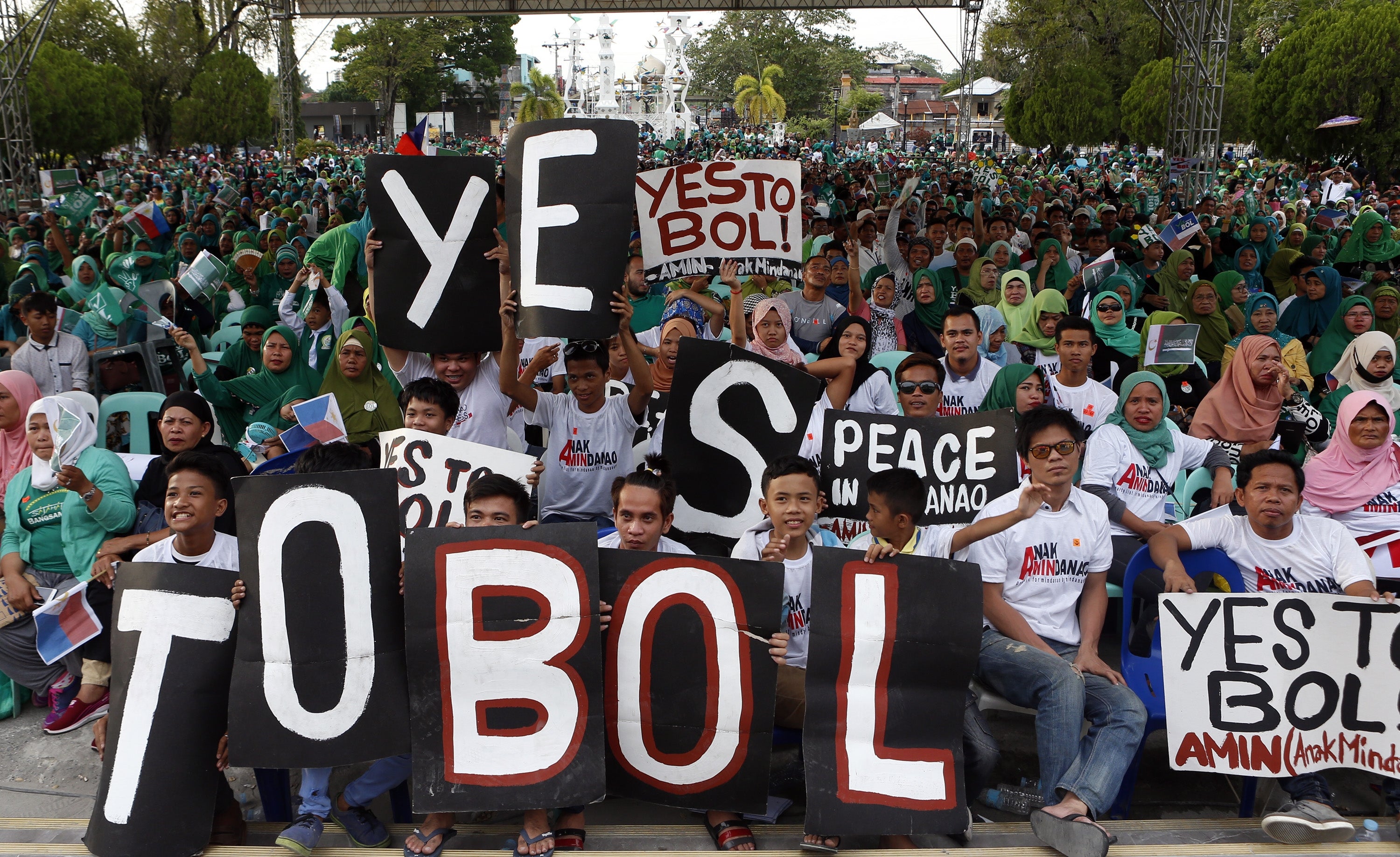 HAVING A BOL Supporters of the Bangsamoro Organic Law (BOL) cheer President Duterte who led a grand rally in Cotabato City on Friday to drum up support for the law meant to give Muslims in Mindanao full authority to govern in the region. The plebiscite for BOL ratification is set for Jan. 21 and Feb. 6. —JEOFFREY MAITEM/ INQUIRER FILE PHOTO

MIDSAYAP, NORTH COTABATO — The canvassing of plebiscite returns from the towns of Pigcawayan, Aleosan, Carmen and Tulunan, North Cotabato have been completed as of 10:25 a.m. Thursday, with 21 of the 67 villages joining the new Bangsamoro region, a Commission on Elections (Comelec) official said.

In a press briefing here shortly before noontime, lawyer Michael Abas, Comelec-12 director, said the counting of votes and the canvassing of election returns went smoothly in the province after polling centers closed at 3 p.m. Wednesday.

About 90 percent of the election returns have been canvassed, he added.

Results of the canvassing in Pikit, Midsayap, and Kabacan were expected to be completed in the day, Abas said.

He placed the voters’ turnout at 54 percent.

On Wednesday, Abas said, “We would be lucky if voters’ turnout reached 60 percent.”

Fr. David Brocalla, coordinator for Mindanao of the Parish Pastoral Council for Responsible Voting (PPCRV), said the conduct of the plebiscite in North Cotabato was peaceful, crediting the military and the police for the orderly outcome.

The PPCRV conducted monitoring but not a quick count of votes.

Authorities earlier raised the possibility the BIAF would spoil the exercise.

Without giving actual numbers, Abas said Tulunan voted no against the inclusion of Barangay Galidan to the BARMM.

In Carmen town, seven villages would join the BARMM while 12 villages in Pigcawayan also voted the same, the official said.

Citing partial results in the towns of Pikit, Aleosan, and Kabacan, Abas said, “many villages are poised to join the BARMM.”

Abas said the completed canvassed plebiscite returns would be flown to Manila on Friday and submitted to the National Plebiscite Board of Canvassers./lzb