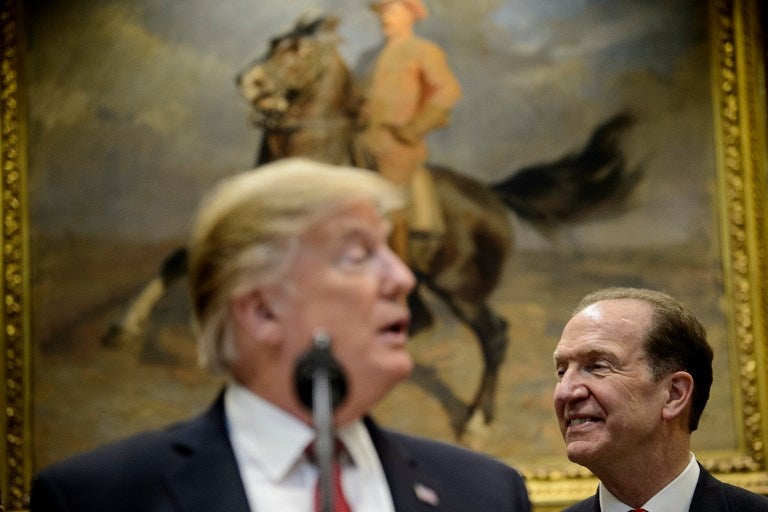 US President Donald Trump announces David Malpass’s candidacy to lead the World Bank during an event in the Roosevelt Room of the White House February 6, 2019, in Washington, DC. Trump =tapped a World Bank critic described as a “happy warrior” of pro-growth policies to lead one of the world’s primary development lending institutions. AFP

David Malpass, a senior official in the Treasury Department, is a controversial choice but if Trump wins the support of a majority the bank’s shareholders, especially European nations, he will have the opportunity to reshape the bank.

Trump called Malpass “an extraordinary man” who and “the right person to take this incredibly important job.”

“America is the largest contributor to the World Bank,” he said. “My administration has made it a top priority to insure that US taxpayer’s dollars are spent effectively and wisely.”

Trump and his team have attacked multilateral institutions in the two years he has been in office, and Malpass has led the charge against the World Bank and the International Monetary Fund.

Malpass has called the international financial institutions’ lending practices “corrupt” and complained about financing to China and other relatively more well-off countries that he says should have graduated from the institutions.

Speaking at the White House, Malpass said he would seek to implement reforms approved last year after negotiations to increase the bank’s lending capital by $13 billion, such as curbing loans to and charging higher interest to higher income countries like China.

“I’m very optimistic that we can achieve breakthroughs to create growth abroad that will help us combat extreme poverty and increase economic opportunities in the developing world,” Malpass said.

Asked about his attacks on the lender, he said his concerns were addressed in last year’s reforms, and he hopes to be able to oversee implementation of those changes.

“It doesn’t make too much sense for the higher income countries to be drawing so many resources from the bank when there are poorer countries that could make use of these resources,” he told reporters.

The surprise early departure of World Bank President Jim Yong Kim, effective February 1, not even halfway through his second five-year term, gives Trump the opportunity to put his stamp on the organization.

Beginning Thursday, the bank’s board will accept nominations until March 14 and plans to name a new president prior the IMF and World Bank Spring meetings, set for April 12-14 in Washington.

Any of the 189 members can propose a candidate.

The Washington-based lending institution has been led by an American since the bank’s founding in the aftermath of World War II, while its sister institution, the International Monetary Fund, has always been led by a European.

Experts had thought it unlikely those countries would join forces against the US candidate but the choice of Malpass could unite them behind a rival.

Many, including former Treasury officials from both political parties, have sharply criticized Malpass and his qualifications, pointing to his failure to foresee the global financial crisis and opposition, which later proved unjustified, to Federal Reserve policies.

The United States is the biggest World Bank shareholder but it does not have a veto and needs the backing of European nations in a simple majority vote by the board.

Senior administration officials said Treasury Secretary Steven Mnuchin had already been reaching out to other World Bank shareholders to make the case for Trump’s candidate.

Malpass will travel next week to Beijing to participate in trade negotiations and then will go to Japan, the World Bank’s second largest shareholder. /cbb