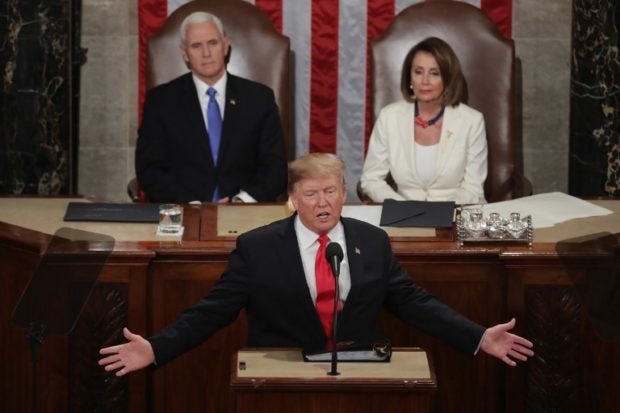 WASHINGTON, DC – FEBRUARY 05: President Donald Trump, with Speaker Nancy Pelosi and Vice President Mike Pence looking on, delivers the State of the Union address in the chamber of the U.S. House of Representatives at the U.S. Capitol Building on February 5, 2019 in Washington, DC. President Trump’s second State of the Union address was postponed one week due to the partial government shutdown. Chip Somodevilla/Getty Images/AFP

WASHINGTON — President Donald Trump’s call for a bipartisan commitment to eradicate HIV in the United States within a decade has been welcomed by experts and advocacy organizations even as major challenges remain.

Addressing Congress during the annual State of the Union speech, Trump hailed what he called recent breakthroughs which “have brought a once-distant dream within reach.”

“My budget will ask Democrats and Republicans to make the needed commitment to eliminate the HIV epidemic in the United States within 10 years.

“Together, we will defeat AIDS in America and beyond.”

The announcement was reminiscent of his predecessor George W. Bush’s announcement at the same venue in 2003 of his President’s Emergency Plan for AIDS Relief (PEPFAR), a $15 billion program considered a great success.

Though Trump’s plan doesn’t yet have a dollar figure, his Health and Human Services Secretary Alex Azar later added details to the president’s rhetoric: the initiative would reduce new infections by 75 percent in the next five years and 90 percent in the next 10, averting 250,000 cases in that span.

Such lofty ambitions would require a major acceleration of current efforts: some 38,000 people were infected with HIV in the United States in 2017, according to government statistics.

“We believe that it’s very much possible to end all new infections, in fact we believe it could be ended by 2025,” Jesse Milan Jr, the CEO of AIDS United, told AFP.

“This initiative, if properly implemented and resourced, can go down in history as one of the most significant achievements of his presidency,” added Michael Ruppal of the AIDS Institute.

But without a substantial budget to accompany the words, “it is a false and cruel promise,” David Holtgrave, Dean of the School of Public Health at the State University of New York added.

There is a broad consensus among experts that the pathway toward elimination involves boosting prevention in the most at-risk communities: gay men, blacks and Latinos and, to a lesser extent, intravenous drug users, who accounted for six percent of cases according to the latest figures.

It will also require a targeting of efforts in 48 counties, Washington, and San Juan, Puerto Rico where half of new infections occur, according to Azar.

Prevention will involve stopping people who are currently infected from infecting others, which involves boosting access to antiretroviral medications — confirmed by studies to drastically reduce transmission rates to HIV-negative sexual partners.

This, however, would require infected patients to first know they are infected, a goal that is currently far from assured with an estimated 165,000 Americans unaware they are HIV positive.

Next, they would require access to antiretroviral therapy, a major challenge in a country where navigating the health insurance system can often be a bureaucratic nightmare and receiving even basic care is often a challenge, especially for lower income groups.

Currently, about one in two HIV-positive patients have their virus under control — with the government targeted a rate of 90 percent.

Six years after their approval in the US, only 220,000 people took them in August 2018, according to prepwatch.org.

Officials estimate only 10 percent of the 1 million Americans at substantial risk currently make use of the treatment.

Finally, condoms must once more come to the fore, according to Michael Weinstein, President of the AIDS Healthcare foundation, who argues: “We’ve gone so totally in the direction of biomedical that we kind of wiped out any safer sex promotion.”

Two-thirds of infections occur among men having sex with men, a rate that shows no signs of slowing down. Blacks are particularly hard hit: a 2016 study by the Centers for Disease Control and Prevention found one in two gay black men will be infected by HIV in their lifetime.