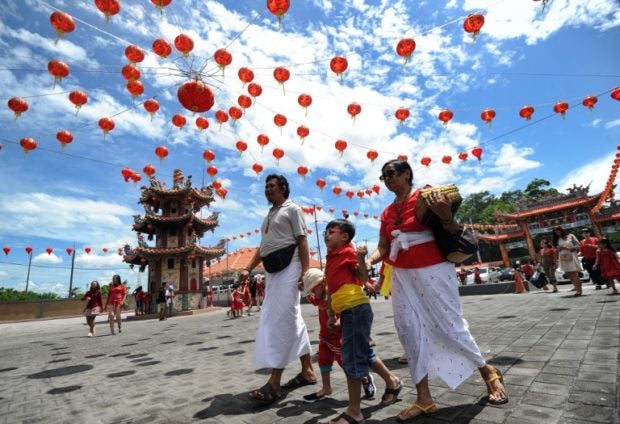 Balinese people wearing traditional outfits arrive at a Chinese temple to pray on the first day of the Lunar New Year in Denpasar on Indonesia’s resort island of island on February 5, 2019. AFP

“This growth is quite an accomplishment…given uncertainty in the global economy and fluctuating commodity prices,” said statistics agency head Suhariyanto, who goes by one name.

However, Indonesia has reported a widening trade deficit in recent months while its manufacturing sector shrank in January, the first contraction in a year.

The latest annual growth data come a few months before Widodo seeks re-election with his economic record topping the agenda.

When he first took office in 2014, Widodo pledged to boost growth to seven percent annually. But his administration has fallen short of that with the figure hovering around five percent a year, despite a huge infrastructure building push and stimulus packages.

The country has also been wrestling with a weak rupiah, dented by a selloff in emerging-market currencies that saw the unit slump to levels last seen during the Asian financial crisis 20 years ago.

However, it has recovered some ground in recent months, supported by the central bank hiking interest rates repeatedly through 2018. /ee