3 people burnt to death after BMW bursts into flames 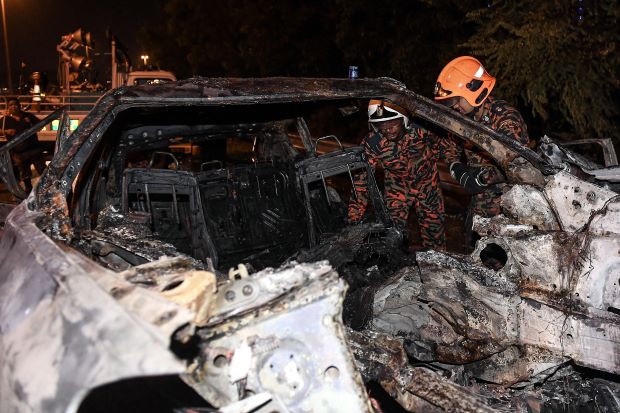 PHOTO from The Star/Asia News Network

KAJANG, Malaysia — Two men and a woman were burnt to death when the BMW they were travelling in burst into flames after crashing into a divider along the Silk Highway.

Kajang OCPD Asst Comm Ahmad Dzaffir Mohd Yussof said the accident occurred at around 6.20pm on Tuesday (Feb 5) along KM6.9 of the highway.

“The car was heading towards Sungai Long when it skidded and smashed into the center divider.

“All three victims in the car were trapped in the vehicle when it burst into flames,” he said when contacted.

He said that the bodies were extricated from the vehicle by Fire and Rescue Department personnel.

“The bodies were sent to the Serdang Hospital for a post-mortem and DNA analysis.

“We have identified the woman as a 65-year-old from Taman Anggerik Emas,” he said.

ACP Ahmad Dzaffir added that the vehicle has been towed to the Kajang police headquarters for checks on its chassis number.

The case has been classified as reckless driving under Section 41(1) of the Road Transport Act 1987.