Lack of money leaves most PH households unprepared for disasters 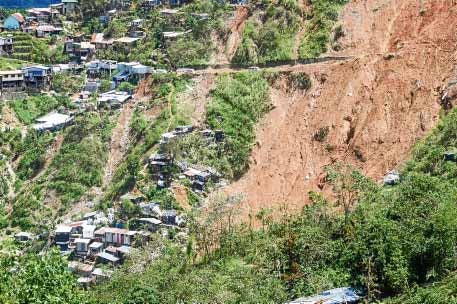 UNPREPARED A Harvard study has found that most Filipinos are unprepared for natural disasters like typhoons, floods, quakes and landslides due to lack of funds, as nearly half of the population doesn’t meet basic needs like food and shelter.20190206-landslides

Despite the country being one of the world’s most vulnerable to disasters, most Filipino households reported feeling unprepared for calamities and natural hazards because of lack of funds,  according to a recent Harvard study.

The first of its kind that measured household preparedness for disasters, the nationwide survey done by Harvard Humanitarian Initiative (HHI) DisasterNet Philippines reached 4,368 households across the country in 2017.

According to the report, only 36 percent of respondents felt fully prepared in the face of disasters, while 33 percent reported that they were somewhat prepared when calamities strike.

The remaining third claimed that they were only slightly or not at all ready for natural hazards, including typhoons, earthquakes, floods and landslides.

HHI said that over 9 million Filipinos had been affected by a disaster in the past five years. However, nearly 47 percent of the respondents said they had done nothing to prepare for these calamities.

While a majority of respondents claimed to have discussed emergency plans with family members, most of them still do not have “go bags,” or emergency bags or even first aid kits, the report said.

For most of the surveyed households, money was considered the main barrier that prevented them to prepare for disasters.

“On average, people did not feel that they had enough resources to cover investment in disaster preparedness, which is unsurprising as nearly half the population did not feel able to meet basic needs: food, water and shelter,” said the study published in June 2018.

Over 70 percent of respondents said they were unable to invest in disaster preparedness, mostly due to lack of funds (47.5 percent) and lack of time. (20 percent).

In the Autonomous Region in Muslim Mindanao, a staggering 92 percent said insufficient funds prevented them from preparing for disasters.

Production assistant Sara Bangayan said while seminars and dry runs in school and at work had personally prepared her, she felt that her family’s overall readiness for disasters was still lacking.

Even though floods from Tropical Storm “Ondoy” swept away most of her family belongings in Marikina City in 2009, Bangayan said her household still had a lot to work on in terms of readiness.

“As long as we know that we remain relatively safe, we don’t usually talk about disaster preparedness at home,” she said. “I feel worried when disaster strikes, especially now that we have several pets that we need to include in our evacuation plans,” she added.

But the hard lessons from past storms—“Frank” in 2008 and “Yolanda” in 2013—have changed the game plan for Jude Ryan Seares and his family when it comes to disasters.

Equipped with go bags and first aid kits, the family living in Iloilo City now stores all  important documents in plastic envelopes. Each family member also carries a whistle at all times.

Seares’ readiness after experiencing disasters was reflected in the survey as well. Those polled in areas frequently struck by typhoons perceived themselves as being more prepared.

More than 50 percent of residents in Eastern Visayas felt very ready, a perception shared in the regions of Bicol (49 percent) and Western Visayas (44 percent.)

“We don’t want to be caught unprepared again,” Seares, 30, said. “Our readiness means saving each others’ lives.”

Rodne Galicha, country manager for Climate Reality Project Philippines, said the report clearly showed the gap between households and disaster risk reduction and management (DRRM) plans that should be crafted at both local and national levels.

“While national agencies have not been lacking in information campaigns, the gap remains at the barangay or city levels,” Galicha said.

“Local governments must be transparent and participatory, with households involved in the crafting of their local DRRM plans,” he added.

Galicha said Filipinos should also go beyond reactive attitudes when it comes to disasters.

“For some, as long as they are not affected, they would not do anything. But once they lose lives, shelter, food and livelihood, that’s when they begin to look into preparedness seriously,” he said.

Even as Congress is considering the creation of a new department on disaster resilience, Galicha said it was more necessary to review and improve on existing policies.

“Instead of a new department, I think Congress should formally have a sunset review of the Philippine Disaster Risk Reduction and Management Act and look into its gaps and gains,” he said.