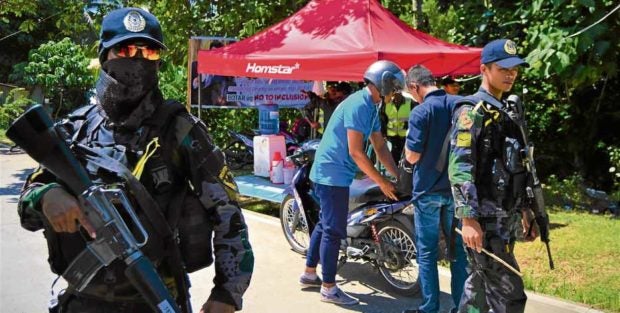 SECURITY CHECK PNP Director General Oscar Albayalde has ordered more road checkpoints, like this one in Tubod town, Lanao del Norte province, to tighten security for Wednesday’s plebiscite that will decide whether six towns in the province and 67 villages in seven towns of Cotabato province will join the Bangsamoro Autonomous Region in Muslim Mindanao. —JIGGER J. JERUSALEM

More than half a million voters in 67 villages in Cotabato province and six towns in Lanao del Norte are expected to decide on Wednesday whether they will join the new Bangsamoro Autonomous Region in Muslim Mindanao (BARMM) in a plebiscite that authorities hope will draw a big turnout.

“The Jan. 21 plebiscite was a success and we hope to duplicate that success here. [But] it remains to be seen whether or not we will be able to match the turnout,” said Comelec spokesperson James Jimenez.

“We are nevertheless hopeful that because this is a politically active area — historically and traditionally — we expect we will have a turnout of at least better than 70 percent,” he said.

About 85 percent of voters turned out for last month’s poll in the whole of the Autonomous Region in Muslim Mindanao (ARMM), plus the cities of Cotabato and Isabela, capital of Basilan province.

Jimenez said there were 639,361 registered voters in the areas covered by Wednesday’s plebiscite.

The vote will be held in the towns of Aleosan, Carmen, Cabacan, Midsayap, Pigkawayan, Pikit and Tulunan in Cotabato to determine whether the people there will allow 67 of their villages to join the BARMM. The 67 villages include 39 that voted for inclusion in the ARMM in a plebiscite in 2001.

Voters in Lanao del Norte, except those in Iligan City, will be asked whether they will allow six of their towns—Baloi, Munai, Nunungan, Pantar, Tagoloan and Tangkal—to be included in the BARMM. Those in the six towns will be asked if they want to join the new autonomous region.

If majority of the voters in the seven Cotabato towns and the 67 villages concerned vote yes, then these barangays will form part of the BARMM. A similar majority is needed in the whole of Lanao del Norte and in the six towns for the inclusion of these municipalities in the new autonomous region.

“A double majority vote [for yes] is needed to make the inclusion happen,” Jimenez said.

He said the “possible spillover of incidents” in other parts of Mindanao was the biggest concern in Wednesday’s plebiscite, referring to the bombings at the Jolo cathedral and at a Zamboanga City mosque that killed 24 people and wounded more than 100 others.

But Jimenez said the Philippine National Police was “not expecting any great disruptions” of the plebiscite.

“We do not see any threat whatsoever, but we cannot relax. Let us be vigilant always, not just … security forces but also the community,” Albayalde said.

He ordered more road checkpoints and heightened visibility “not just today or tomorrow, but every day” to prevent a repeat of the Jolo bombing.

Later in the day, however, two separate explosions rocked the towns of Kauswagan and Lala, both in Lanao del Norte, but caused no injuries.

Brig. Gen. Thomas Sedano Jr., commander of the 2nd Mechanized Infantry Brigade based in Iligan, said the Army had deployed 1,600 soldiers to secure polling places in the province.

“We will make sure that Wednesday’s plebiscite will be peaceful and credible because we know how important this plebiscite is, not only in Lanao del Norte but also in the whole country,” he said.

About a dozen families from the Lanao del Norte towns of Sultan Naga Dimaporo, Lala, Kolambugan, Baroy and Kapatagan sought refuge in relatives’ homes at Ozamiz City in neighboring Misamis Occidental province because of tensions created by “wrong information” about the plebiscite, according to Senior Supt. Leopoldo Cabanag, Lanao del Norte police director.

The Ozamiz government said 19 families (111 people), mostly women and children, had arrived in the city since Feb. 2 because of rising tensions between supporters and opponents of the BOL, according to Rico M. Guangco Jr., city disaster risk reduction and management officer.

Kolambugan Mayor Lorenzo V. Manigos said some of his constituents were intimidated by the presence of MILF’s yes campaigners.

He said prominent politicians in the province were divided over the BOL, with First District Rep. Khalid Q. Dimaporo campaigning against the law and Maigo town Mayor Rafael Rizalda pushing for it.

Pastor Tom Banawa, a resident of Barangay Dableston in Sultan Naga Dimaporo, said their neighbors left their small children with their relatives outside the province and came back to vote.

“Those who can vote have come back to vote,” said Banawa. “We are staying because I don’t want to waste my vote for this plebiscite. This is very important to me.” —Reports from Tina G. Santos, Jaymee T. Gamil, Richel Umel, Divina Suson, Tito Fiel and Bong Sarmiento