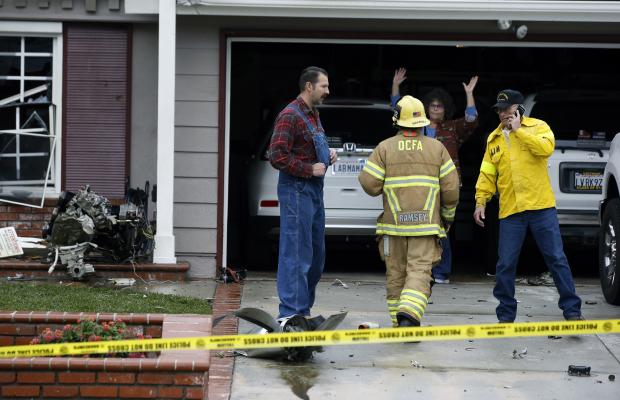 Residents work with authorities at the scene of a deadly plane crash in the residential neighborhood of Yorba Linda, California, Sunday, Feb. 3, 2019. The Federal Aviation Administration said a twin-engine Cessna 414A crashed in Yorba Linda shortly after taking off from the Fullerton Municipal Airport. (Photo by ALEX GALLARDO / AP)

Four people in the house that burned in the city of Yorba Linda were killed, along with the pilot, who was the only person in the twin-engine plane, Orange County Sheriff’s Lt. Cory Martino told reporters.

Martino said the dead occupants of the home were two males and two females but did not provide other information about them.

The Cessna 414A that can carry up to eight people took off from the Fullerton Municipal Airport about 19 kilometers (12 miles) west of the blaze, Federal Aviation Administration spokesman Allen Kenitzer said.

The two-story house burst into flames after being hit by the plane’s main cabin and one its engines, sending panicked neighbors into the streets.

The second engine dislodged and fell onto the street, creating a large hole in the asphalt, according to Eliott Simpson, an aviation accident investigator with the National Transportation Safety Board.

“It was a boom. It sounded like something exploded. It shook our house,” said John Wolbart, who lives a block away.

He said he ran to the burning house and saw a woman come out with singed hair.

The wounded were taken to a hospital with burns, said Pokey Sanchez, an assistant chief with the Orange County Fire Authority. A firefighter was also treated for a minor injury.

Clint Langford, who lives about a half-mile (0.8 kilometers) away, said he was in his living room when he heard a low rumbling.

“It’s the eerie, low rumbling sound that keeps getting lower and louder. It was scary,” he said. “And then all of a sudden boom. It shook the house.”

He looked out his front door and could see plane parts falling out the sky in the distance. 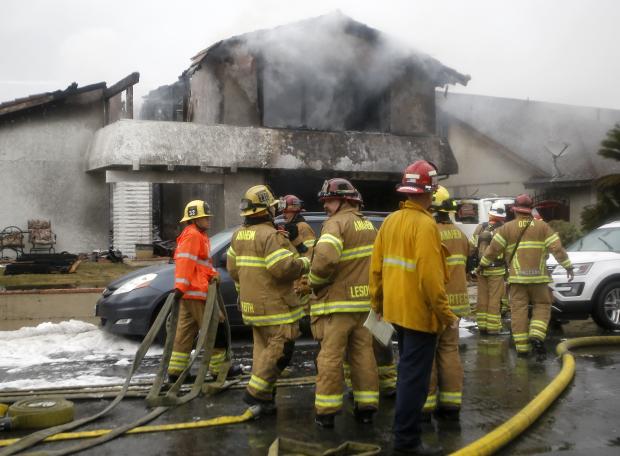 Firefighters suppress a fire at the scene of a deadly plane crash in the residential neighborhood of Yorba Linda, California, Sunday, Feb. 3, 2019. The Federal Aviation Administration said a twin-engine Cessna 414A crashed in Yorba Linda shortly after taking off from the Fullerton Municipal Airport. (Photo by ALEX GALLARDO / AP)

Pat Rogers, who lives about a mile (1.6 kilometers) from the crash site, told the Orange County Register he saw the plane on fire and coming apart.

A video posted on Twitter showed panicked residents running to the house as it became engulfed in flames and dark smoke. One man used a garden house to douse a burning wing that landed on the street.

Aerial footage from news helicopters showed plane parts, including side panels and a propeller, scattered on rooftops and driveways near the burned house.

The main body of the plane was found in the backyard of another home not far from the burned house. The fire spread to an SUV that was parked in the driveway.

The National Transportation and Safety Board will investigate the cause of the crash. /atm