Some lofty goals from 2018 State of Union speech still unmet 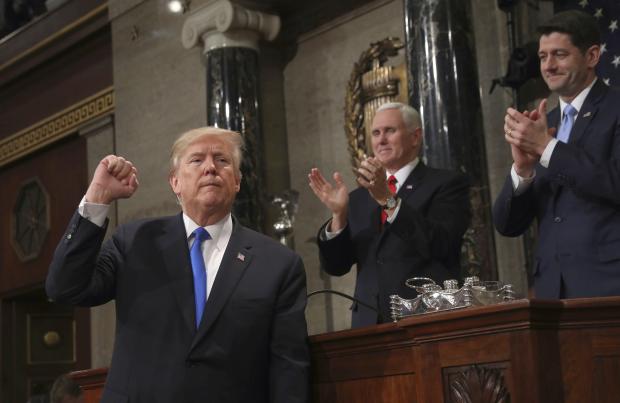 In this photo, taken Jan. 30, 2018, President Donald Trump gestures as he finishes his first State of the Union address in the House chamber of the U.S. Capitol to a joint session of Congress in Washington, as Vice President Mike Pence and House Speaker Paul Ryan applaud. (Pool photo by WIN MCNAMEE via AP)

WASHINGTON — President Donald Trump whiffed on some lofty goals that he laid out in last year’s State of the Union address, most notably his call for an overhaul of immigration laws and a “great wall on our southern border” but also on his pitches for a big infrastructure boost and bringing unity to Washington.

He scored victories on legislation dealing with prison and sentencing overhauls, and in giving terminally ill patients more treatment options. His promise of new trade deals is a work in progress.

Some issues Trump highlighted in his speech from Jan. 30, 2018, and how things worked out.

TRUMP: “For over 30 years, Washington has tried and failed to solve this problem. This Congress can be the one that finally makes it happen.”

WHAT HAPPENED: The Senate took up four immigration-related bills just a few weeks after Trump’s State of the Union address in January 2018, and all four failed.

Senators soundly rejected the proposal Trump favored. Besides helping Dreamers achieve citizenship, the president’s measure would have provided wall funding in one burst, rather than doling it out over 10 years as the bipartisan plan proposed.

In addition, Trump’s bill would have prevented legal immigrants from sponsoring parents and siblings for citizenship and would have ended a visa lottery aimed at allowing more diverse immigrants into the U.S.

The White House lobbied to defeat the primary alternative — a compromise bill that would have offered a path to citizenship for young immigrants in the country illegally who were brought here as children and $25 billion for a border security trust fund doled out over 10 years.

Months later, the Republican-led House resoundingly rejected a far-ranging immigration bill, with nearly half of Republicans opposing the measure. The depth of GOP opposition was an embarrassing showing for Trump and a rebuff of House leaders.

More recently, with Democrats now in control of the House, the government experienced its longest shutdown ever over the president’s refusal to sign spending measures that did not include money for the border wall. Congressional talks on border security continue, with the threat of another shutdown on Feb. 15 if there’s no deal.

TRUMP: “Tonight, I call upon all of us to set aside our differences, to seek out common ground, and to summon the unity we need to deliver for the people we were elected to serve.”

WHAT HAPPENED: The 35-day shutdown is Exhibit A that unity remains elusive. Exhibit B is the vitriol in the president’s Twitter feed. Critics’ comments about Trump can be brutal as well. Freshman Rep. Rashida Tlaib, Democrat-Michigan, told supporters after her swearing in that lawmakers will work to impeach Trump, using a vulgarity to describe the president.

TRUMP: “People who are terminally ill should not have to go from country to country to seek a cure — I want to give them a chance right here at home. It is time for the Congress to give these wonderful Americans the ’right to try.’”

WHAT HAPPENED: Congress passed such legislation and Trump signed it into law in May. The bill helps people suffering from deadly diseases access experimental treatments. Supporters said it would give patients “a beacon of hope.” Opponents, including patients’ groups and Democrats, said it peddled false hope and ineffective drugs to desperate patients.

TRUMP: “One of my greatest priorities is to reduce the price of prescription drugs. In many other countries, these drugs cost far less than what we pay in the United States. That is why I have directed my administration to make fixing the injustice of high drug prices one of our top priorities. Prices will come down.”

WHAT HAPPENED: The Bureau of Labor Statistics reported that prices for a basket of brand-name and generic drugs that it tracks fell 0.6 percent last year. Still, an Associated Press analysis solely of brand-name drugs during the first seven months of 2018 found 96 price increases for every price cut. Lawmakers from both parties have announced that tackling high prescription drugs costs is a priority for the new Congress.

TRUMP: “We will work to fix bad trade deals and negotiate new ones.”

WHAT HAPPENED: The administration renegotiated a revised North America trade pact that scored wins for autoworkers and dairy farmers, but the deal needs approval from Congress. Trump got South Korea to agree to a rewrite of a 2012 trade deal in which Seoul submitted to quotas on its steel and aluminum exports to the United States and modestly opened South Korea’s auto market to U.S. automakers.

Trump’s effort to reset trade with China has resulted in both nations increasing the tariffs that importers pay, which companies must absorb or pass on to consumers through higher prices. Negotiations continue, with the U.S. set to raise tariffs on an additional $200 billion worth of Chinese imports in March if a deal is not reached.

TRUMP: “Tonight, I am calling on the Congress to produce a bill that generates at least $1.5 trillion for the new infrastructure investment we need.”

WHAT HAPPENED: Despite lawmakers from both parties saying they wanted to invest in the nation’s roads and bridges, no proposal gained traction. The sticking point is how to pay for it, and there simply wasn’t the political will to make it happen.

TRUMP: “As America regains its strength, this opportunity must be extended to all citizens. That is why this year we will embark on reforming our prisons to help former inmates who have served their time get a second chance.”

WHAT HAPPENED: Trump helped to push a prison and sentencing overhaul over the finish line in December when he came out strongly for the compromise that Republican and Democratic senators had worked out. The law gives judges more discretion when sentencing some drug offenders and will boost prisoner rehabilitation programs, among other efforts.

TRUMP: “I am asking Congress to ensure that in the fight against ISIS and al-Qaida we continue to have all necessary power to detain terrorists wherever we chase them down, wherever we find them. And in many cases, for them, it will now be Guantanamo Bay.”

WHAT HAPPENED: The president has kept open the detention center on the U.S. base at Guantanamo Bay, Cuba, but no new prisoners have been brought there under Trump.

The administration allowed the release of one prisoner, a Saudi who was sent back to his homeland to serve out the remainder of his prison sentence as part of a plea agreement with U.S. military prosecutors. The U.S. now holds 40 prisoners at Guantanamo. /atm