Lacson claps back at Bravo: Those are ‘pathetic assertions’ 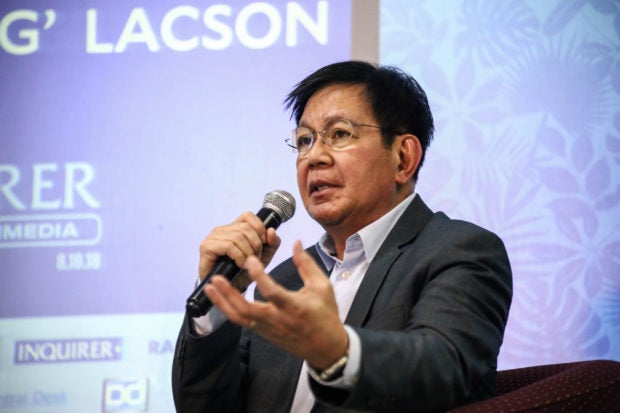 MANILA, Philippines — Senator Panfilo Lacson has downplayed as “pathetic assertions” a party-list congressman’s denial that each House member has hundreds of millions of pesos in “pork” allocations in the proposed P3.8-trillion 2019 national budget.

COOP NATCCO Rep. Anthony Bravo did not categorically deny Lacson’s P160 million per congressman allegation but said the amendments introduced by the House in the National Expenditure Program are not “pork barrel.”

“These are pathetic assertions by the good party-list representative. If he intended to be truthful about his statements, he should not have skipped my revelation about the P23B (billion) insertions made by a number of senators on the DPWH (Department of Public Works and Highways) budget alone,” Lacson said in a statement on Friday.

The senator reminded Bravo that the fight against the pork barrel system was his “long-standing advocacy” even before the Supreme Court declared the Priority Development Assistance Fund (PDAF) as unconstitutional in 2013.

PDAF is a type of pork barrel or lump sum appropriations during post-enactment of the budget that is usually used to fund lawmakers’ pet projects.

Lacson then quoted a portion of his privilege speech on the issue more than one and a half decades ago: “Thus, I am sure to lose some friends and create more enemies in this 12th Congress. I am sure skeptics will taunt me and the cynics will mock me without end.”

Aside from his pork allegations against House members, Lacson also bared that one or more of his colleagues in the Senate had made P3.3-billion budget “insertions” for one province alone. The amount was part of the P23 billion that he earlier said some senators have inserted into the budget of the DPWH.

READ: Lacson: One province gets P3.3-B budget ‘insertions’ from senators

The country has been operating under a reenacted budget since January, which means that the government is basing its expenditure on the 2018 financial plan, as Congress has yet to approve the proposed 2019 national budget.

Lacson said he and other members of the Senate panel in the bicameral conference committee would await the report of Legarda and Andaya’s small panel.

“It cannot be the business-as-usual practice of simply ramming down our throats whatever the 2 agree upon. 160 m (million) per cong (congressman) is simply too much and unacceptable. Multiplied by 300 congs, that’s easily 48b (billion), not counting their members who are getting billions more,” he added. /kga