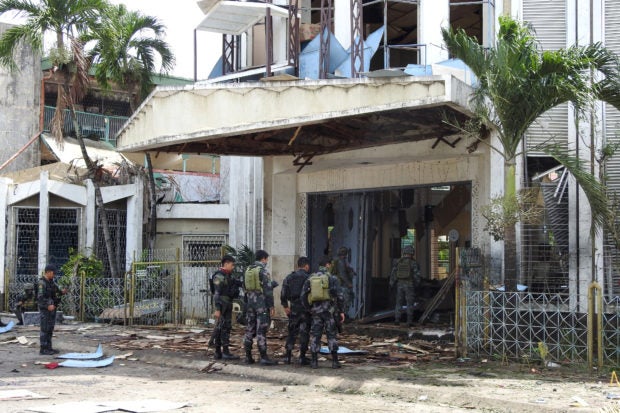 Police officers and soldiers stand outside bomb-hit Cathedral of Our Lady of Mount Carmel in Jolo, Sulu, a stronghold of Islamist militants. At least 20 people were killed when two bombs hit the cathedral on Sunday, Jan. 27, 2019, days after voters backed the creation of a new Muslim autonomous region. (Photo by NICKEE BUTLANGAN / AFP)

MANILA, Philippines — Defense Secretary Delfin Lorenzana is convinced that the January 27 twin explosions at a Catholic cathedral in Jolo, Sulu was a case of suicide bombing.

Lorenzana, in a text message to reporters on Friday, said: “I believe, with evidence at hand that the Cathedral bombing was a suicide bombing.”

The first bomb went off inside Our Lady of Mount Carmel Cathedral during Mass last Sunday, and moments later, a second blast occurred outside the church as government troops rushed to respond to the first explosion. The attack left at least 20 people killed and more than 100 others wounded.

Authorities are looking at recovered body parts strewn all over the explosion site.

“According to the forensic investigators of the PNP (Philippine National Police) these body parts could belong to two persons — one inside the church and one outside,” Lorenzana explained.

Lorenzana earlier said they had received information on bomb threats at the cathedral as early as August 2018. Since then, they have tightened up their security there.

“The church was heavily guarded 24 hours daily since August when threats to bomb it surfaced. Those entering were screened. All bags and belongings were checked,” he said.

“The bombs could have been strapped in the body of the bomber and escaped the attention of the soldiers doing the screening,” he added.

President Rodrigo Duterte said earlier this week the suspected bombers were a couple — a woman, who brought the bomb inside the church, and a man, who was at the entrance where the second explosion happened.

Authorities are looking at the Abu Sayyaf as primary suspects, but the Islamic State has also claimed responsibility for the attack, saying it was two of their suicide bombers who carried it out.

The military, meanwhile, has not yet concluded if the double blasts in Jolo were indeed a case of suicide bombing.