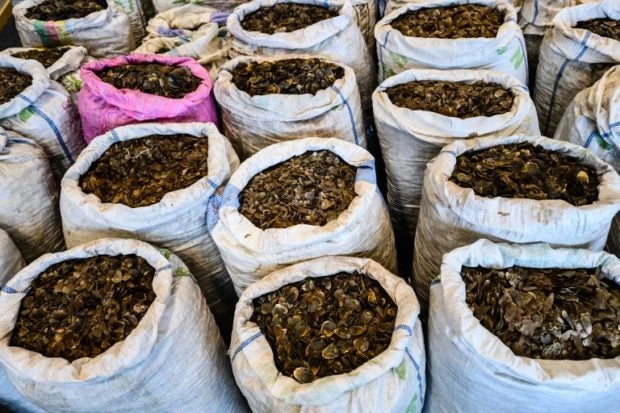 Customs officers said they conducted a joint investigation with mainland officials on 16 January, seizing 8,300 kilos of pangolin scales and 2,100 kilos of ivory tusks hidden inside a container — declared to be carrying frozen beef — at a customs facility.

“This is a record high in quantity for a seizure of pangolin scales,” the customs department said in a statement.
A man and a woman from a trading company in the city have since been arrested, the department said.

Customs officers displayed dozens of sacks filled with scales to the media as well as hundreds of uncarved tusks, in an acrid-smelling room. Officials estimated the value of the haul at HK$62 million ($8 million).

The announcement came less than two weeks after a coalition of local conservation groups called on Hong Kong to do more to crack down on illegal wildlife smuggling by ending legal loopholes and lenient sentences.

In a landmark report analyzing seizures and convictions, conservationists said the southern Chinese financial hub played a “disproportionate” role in wildlife crime — accounting for around a fifth of all global ivory seizures and nearly half of all pangolins seized in the last decade.

Warning that the amount of contraband flooding through Hong Kong’s ports was likely between five and 10 times the amount seized, they called on authorities to list wildlife trafficking offenses under the city’s organized crime legislation targeting drug traffickers and triad gangs.

Hong Kong recently increased the maximum penalties on smuggling to 10 years in jail and a HK$10 million fine.
Historically, the few who are caught have rarely faced stiff penalties.

The timid and nocturnal pangolin, which rolls into a ball when threatened — making them defenseless against poachers — is one of the most heavily trafficked mammals.

It is sought after for its meat and the unproven medicinal properties of their scales — which are made from nothing more than keratin, the same material that makes up human fingernails and hair.

Pangolin populations have been ravaged by a surge in demand, particularly in mainland China.

ADM Capital Foundation, one of the groups behind last month’s report, said 21 tonnes of pangolin scales have now been seized in the last year in Hong Kong.

“This is a massive increase over the previous five years and if remains unchecked, such numbers signal the likely extinction of the species,” the group said.

China finally banned the ivory trade a year ago, while Hong Kong began phasing it out a few months later. Demand, however, is still fueled by a thriving black market. /ee

Read Next
Priest cries harassment, blames Duterte’s attacks on Church
EDITORS' PICK
Heads may roll at BOC, says Palace if sugar smugglers are allowed to use recycled import permits
What to watch out for when selecting a video surveillance solution
Apple warns of flaw that lets hackers into iPhones, Macs
House energy committee chair Arroyo bats for cheap electricity
46% of schools nationwide to have full face-to-face classes on Aug. 22
vivo brings to the Philippines a powerful smartphone with a slimmer body, the vivo Y02s for only PHP 6,499
MOST READ
DepEd to give teachers P5K cash allowance within first week of classes
Dressing the dead: Indonesian villagers clean corpses in afterlife ritual
DOJ indicts bank officer in $2.1 billion Wirecard fiasco
Mayor bares issues vs closed QC school
Don't miss out on the latest news and information.