Less is more? Trump out of sight as border talks play out 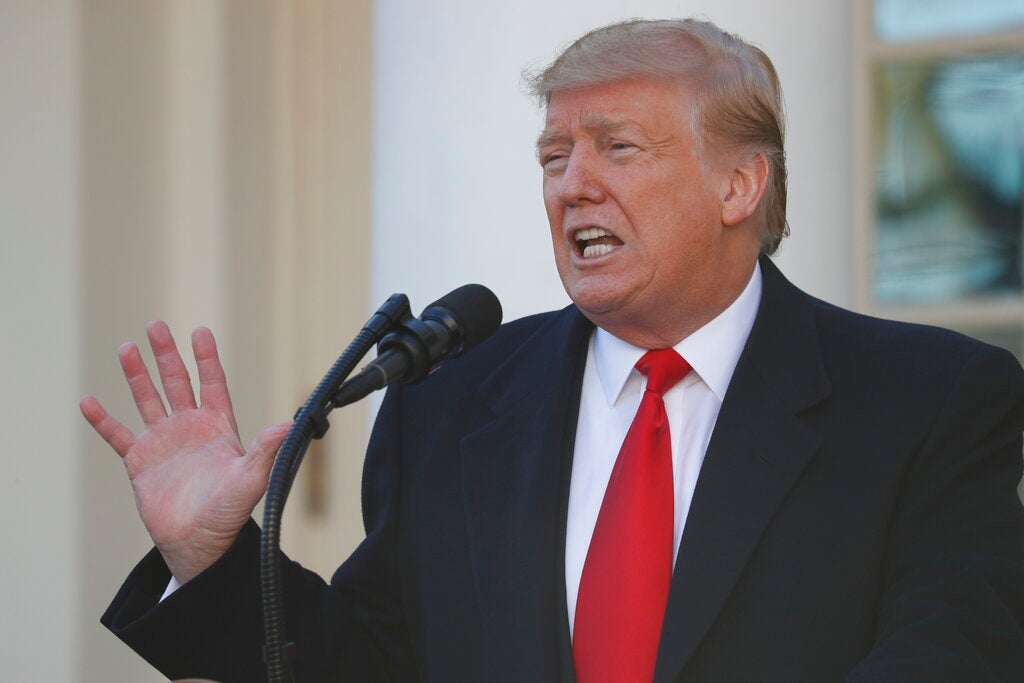 In this Jan. 25, 2019, photo, President Donald Trump speaks in the Rose Garden of the White House in Washington. While government reopens, Trump remains behind closed doors. Since Saturday, Trump has listed no public events on his schedule and has provided few details on his doings. (AP Photo/Jacquelyn Martin)

WASHINGTON — No televised roundtables with Cabinet secretaries. No freewheeling speeches from the Oval Office. No shouted comments on his way to Marine One.

Where’s the president? While the federal government is open once again, President Donald Trump has been largely behind closed doors.

Republicans and Democrats alike seem just fine with Trump hanging back as legislators try to work out a deal to keep the government open and resolve a standoff over funding for the president’s long-sought wall at the southern border. In fact, some lawmakers think less Trump might be a good thing, given his rocky relationships with legislators and open criticism of his negotiating abilities.

Over the last five days, Trump has had no public events.

The White House says the president has made his demands for border wall funding clear and that he is letting the committee process play out on Capitol Hill. One official, speaking on condition of anonymity to discuss private talks, stressed that Trump was “engaged at every level” on border security, including receiving a lengthy briefing on the topic Wednesday, and has continued to get his message out, including doing an interview with The Daily Caller. The official added that the White House has also been heavily involved at a staff level.

Democrats, for their part, are more pointed about the positive aspects of less Trump.

Said Senate Minority Leader Chuck Schumer, a New York Democrat: “When the president stays out of the negotiations, we almost always succeed. When he mixes in, it’s a formula for failure. So I’d ask President Trump, ‘Let Congress deal with it on its own.'”

Asked about Schumer’s comment, Trump told The Daily Caller, “I don’t blame him.” But the president added that “without our involvement, a deal is not going to get done.”

While Trump has been avoiding public appearances, he’s continued dishing out his practiced blend of bluster and blame on Twitter — including contradicting his intelligence chiefs and slamming a former staffer for writing a White House tell-all. He has also weighed in on the congressional negotiations, saying that if the negotiating committee “is not discussing or contemplating a Wall or Physical Barrier, they are Wasting their time!”

Never able to stay out of the public eye for long, Trump will be speaking up more in the coming days. He’ll do an interview with CBS that will air during the Super Bowl on Sunday, his State of the Union address is Tuesday and the White House is weighing travel options for after the speech to drive home his message on border security.

Going quiet after the fractious fight with Democrats raised questions about whether Trump was missing an opportunity to publicly frame the debate and push his border security arguments. But some Republicans said it was the right move.

“I think it’s smart for him to hang back here,” said Marc Short, former White House director of legislative affairs. “I do think he should still be traveling to vulnerable districts to put pressure on (Democrats) politically. But I think it’s fine for him not to be at the center of the negotiations.”

Trump’s allies also noted that he has been working on a variety of other issues throughout this period. He called Venezuelan opposition leader Juan Guaido to offer his support Wednesday. He attended a political function at the Trump International Hotel on Monday night. He hosted Sen. David Perdue of Georgia for lunch at the White House on Sunday.

Bennett argued that giving Congress some space made sense for Trump, adding: “If I was him, I would see what they offer. If they don’t solve it, then solve it yourself.”