Korean students nabbed while trying to raid US Embassy 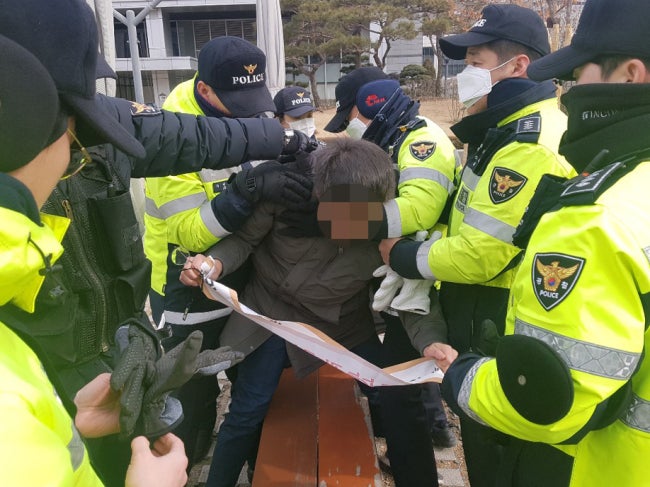 SEOUL — Police on Thursday arrested a group of progressive college students who tried to rush through the front gate of the US Embassy in Seoul in protest of Washington’s demand for a sharp increase in Seoul’s share of the upkeep costs for US troops stationed in the country.

“Five members from the Progressive Union of University Students were taken (by the police) at around 1:20 p.m. as they attempted to run in through the embassy’s front gate,” an officer at Jongno Police Station said.

Earlier, the students held a news conference near the embassy, denouncing the US call for a hike in South Korea’s financial burden for the US troop presence.

They also unsuccessfully tried to hand over a letter of protest to the mission.

Police plan to book them for violating the assembly and demonstration law.

Since March last year, Seoul and Washington have held a series of talks over how much financial cost South Korea should bear for

Read Next
Korean woman starts fire after breakup, calls ex for help
EDITORS' PICK
Alex Eala wins Grand Slam on Independence Day: ‘I hope I made my contribution to the country’
Kai Sotto continues to inspire Filipinos by sharing his passions and stories with Smart Prepaid
Ahead of ONE: Full Blast II, Mongkolpetch warns Elias Mahmoudi: ‘Watch out for my fists’
G7 rivals China with grand infrastructure plan
PNP, PDEA destroy P25.8M worth of marijuana in Kalinga
Rare earth metals at the heart of China’s rivalry with US, Europe
MOST READ
Groups slam Duterte ‘surrender’ to China
PH logs 7,302 new COVID-19 cases — DOH
1Sambayan names 6 choices to pit vs Duterte’s anointed in 2022
MVP steps into new role as top PLDT cheerleader
Don't miss out on the latest news and information.