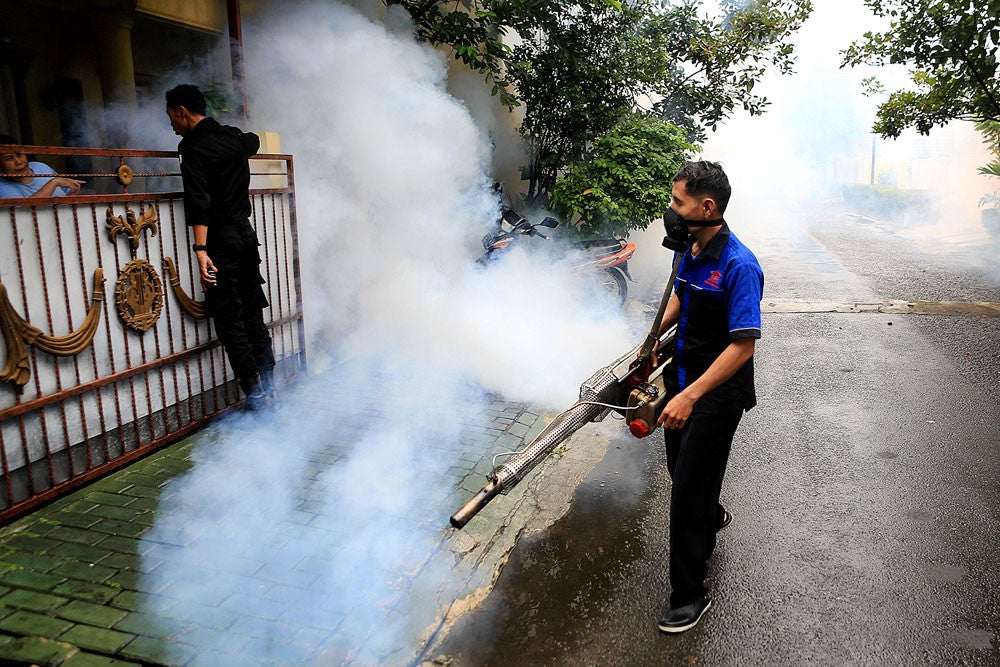 A worker uses a fogging machine on Jan. 31 to eradicate mosquitoes in a residential area in Bintaro, South Tangerang. The government is intensifying efforts to prevent dengue transmission, with this year’s rainy season forecast to peak in January-February. The Jakarta Post/Seto Wardhana

JAKARTA — The Health Ministry has recorded a sudden spike in dengue fever cases in the last four weeks, with the death toll rising to 132 by Jan. 29.

Peak dengue transmission typically occurs during the rainy season, when the dengue-bearing Aedes aegypti mosquito is most active.

The figures have increased rapidly in the five days from Jan. 25 to 29, from the 9,634 cases and 110 dengue-related deaths the ministry recorded across 372 municipalities and regencies up until Jan. 25.

The ministry’s data shows a total of 13,683 reported dengue fever cases from Jan. 1 to 29, with the highest number of dengue-related deaths recorded in East Java (47 deaths), followed by East Nusa Tenggara ( 14 ) and North Sulawesi ( 13 ).

“The number of cases could still rise,” the ministry’s director for vector-borne and zoonotic diseases, Siti Nadia Tarmizi, told The Jakarta Post on Thursday. “But hopefully, the increase will not be significant.”

This was double the figure on Jan. 25, when only four regions had declared a dengue emergency.

Dengue emergency measures focus on intensifying vector control, including fogging and the use of larvicide.

By Thursday, East Java had the highest number of reported dengue cases with 2,657 cases, followed by West Java with 2,008 and NTT with 1,169 cases.

“Looking at the total number of cases [so far], everything is still under control. Even so, we are now on the alert,” said Siti.

She said that controlling the adult and larval population of the Aedes aegypti mosquito was pivotal to preventing transmission of the dengue virus. She encouraged communities to stay alert and to use larvicides and the 3M “drain, cover, bury” method to eliminate standing water that was essential to the mosquito’s life cycle.

The Meteorology, Climatology and Geophysics Agency’s (BMKG) head of climate and air quality information, Siswanto, said that the rainy season could last into March.

“This year’s rainy season will peak from January to February [nationwide], but high-intensity rainfall could continue until March,” he told the Post on Thursday.