50 hurt in bus-truck collision on SCTEx 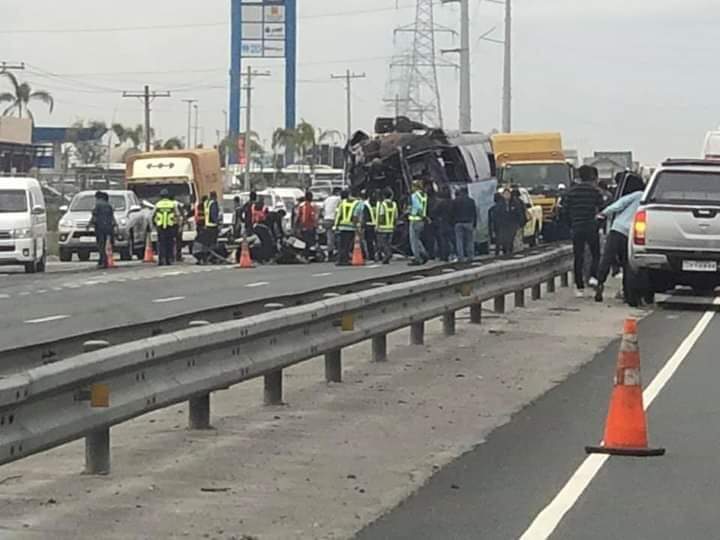 MANILA, Philippines – Four people were killed and about 30 people were injured after a tour bus collided with a truck along the northbound lane of the Subic Clark Tarlac Expressway (SCTEx) in Concepcion, Tarlac, on Thursday morning, a traffic official said.

READ: 4 die as bus slams into rear of truck on SCTEx

He noted that the bus which was coming from Cavite was carrying government employees.

Ignacio said that initial investigation showed that the bus slammed into the rear of the truck.

Melvin Viloria, supervisor of SCTEx traffic control room, said the accident happened in front of the PTT gas station at about 5:20 a.m.

The traffic official said investigators were still looking into whether the bus driver miscalculated his speed or fell asleep before the accident.

Ignacio said the accident slowed traffic in the area up to 200 meters from the crash site. Maria Adelaida Calayag /cbb

Read Next
P3.4M ‘shabu’ seized in Legazpi City
EDITORS' PICK
Do all the things you do, faster
Motorcycles, smartphones, and cash prizes up for grabs in TNT’s ‘Tuloy Ang Saya’ Raffle in Mindanao
House energy committee chair Arroyo bats for cheap electricity
NCR at increased COVID risk again
New PS-DBM director says DepEd laptop MOA ‘not legal’
House okays budget; ways to go in Senate
MOST READ
Robredo’s tarpaulin portrait at Palace just a ‘placeholder’
Shopee PH gets flak for getting Toni Gonzaga
Robredo supporter tackles elephant in room: No massive fraud in 2022 polls, surveys were just right
DepEd: We are in a crisis situation in education sector
Don't miss out on the latest news and information.