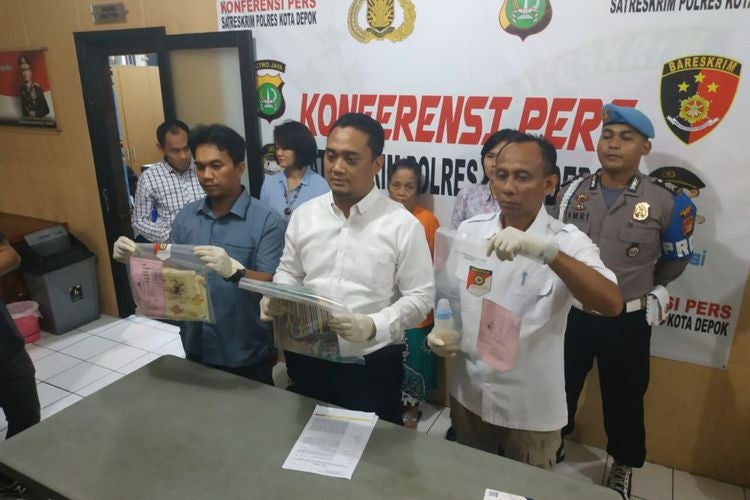 Depok Police in West Java show evidence in a murder case of a 2-month-old baby, at the police headquarters on Jl. Margonda on Jan. 29. Photo via The Jakarta Post

JAKARTA — Depok Police in West Java have named nanny Romlah, 66, a suspect in the murder of a 2-month-old baby girl found in the Villa Santika Residency in Pancoran Mas.

Depok Police crime unit chief Comr. Deddy Kurniawan said that Romlah allegedly killed the baby on Monday because she would not stop crying.

“She was upset because the baby kept crying even after she fed her with a bottle of milk,” he said on Tuesday as reported by kompas.com.

Based on the police’s autopsy, Deddy added, the baby was found to have been pinched on her cheek, nose and lips to the point of bleeding.

Deddy said that after trying to feed the baby with milk from a bottle, Romlah put the baby on her stomach, which prevented her from breathing.

Romlah faces charges under Article 80 of Law No. 35/2014 on child protection and Article 338 on murder, which carry a maximum punishment of 15 years in prison.