Bautista Air Base in Palawan eyed as next Edca site 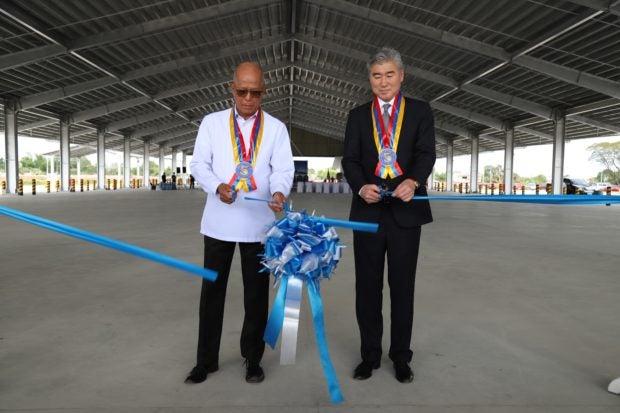 Defense Secretary Delfin Lorenzana (left) and US Ambassador to Manila Sung Kim at the inauguration of the first Edca facility at the Basa Air Base in Pampanga. PHOTO from DND

MANILA — The Antonio Bautista Air Base in Puerto Princesa City, Palawan is being eyed as the next project site for the Enhanced Defense Cooperation Agreement (Edca) with the United States.

Defense Secretary Delfin Lorenzana told INQUIRER.net that the construction for the facility in Palawan would only start when the funding from the United States is released.

“Remember, it took the US about several years after the Edca was declared constitutional by our Supreme Court before the US could get funding,” he said on Wednesday.

The Edca, a deal signed by the Philippines and US in 2014, aims to allow the latter to station its troops and store its assets at the bases they will build for their humanitarian assistance and maritime security operations.

Its constitutionality was upheld by the Supreme Court in 2016 after facing legal hurdles.

But the construction for the first Edca facility at the Basa Air Base in Pampanga only commenced in April 2018.

On Tuesday, Philippine and US officials finally launched the first Edca project, a multi-purpose warehouse that will be used for the storage of assets for humanitarian assistance and disaster response.

Lorenzana said a similar facility would be built in Palawan.

The Antonio Bautista Air Base is a few dozen miles from the West Philippine Sea (South China Sea).

Aside from Basa Air Base and Bautista Air Base, other military facilities offered to the US for Edca are Fort Magsaysay in Nueva Ecija, Lumbia Airport in Cagayan de Oro, and the Mactan-Benito Ebuen Air Base in Cebu. /ee

Read Next
Dangerous arctic chill sweeps over US Midwest
EDITORS' PICK
Cebu City closes its borders
BREAKING: 1,075 people in PH has coronavirus disease – DOH
Style and music journeys with Claudia Barretto
DILG to stranded workers: ‘Stay where you are’ until Luzon-wide quarantine is over
UP-PGH wards for COVID-19 patients finished in 5 days
IATF: Food firms to operate with 50% of workforce during Luzon quarantine
MOST READ
Pacquiao to seek probe on leaked private letter from Barangay Dasmariñas
Tootsy Angara bares neighbor wanted them out of village
No more bread? Company forced to limit production
All 3 COVID-19 positive patients in Bicol sent home
Don't miss out on the latest news and information.