As cold stalks Midwest, focus is on protecting vulnerable 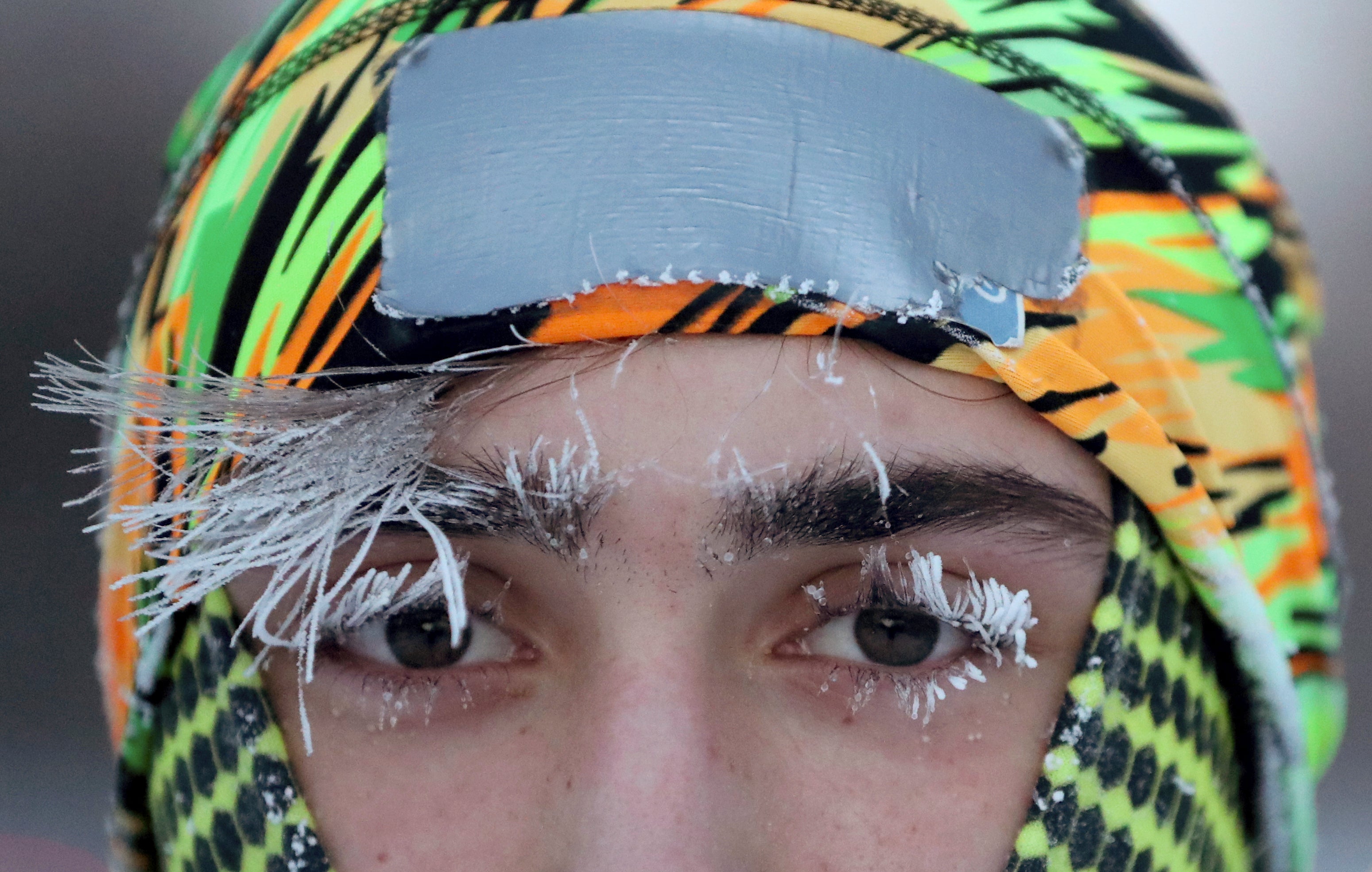 Frost covers part of the face of University of Minnesota student Daniel Dylla during a morning jog along the Mississippi River Parkway Tuesday, Jan. 29, 2019, in Minneapolis. Extreme cold and record-breaking temperatures are crawling into parts of the Midwest after a powerful snowstorm pounded the region, and forecasters warn that the frigid weather could be life-threatening. AP

BISMARCK, North Dakota, United States — Winter’s sharpest bite in years moved past painful into life-threatening territory Tuesday, prompting officials throughout the Midwest to take extraordinary measures to protect the homeless and other vulnerable people from the bitter cold, including turning some city buses into mobile warming shelters in Chicago.

“These are actually a public health risk and you need to treat it appropriately and with that effort,” Chicago Mayor Rahm Emanuel said Tuesday. “They are life-threatening conditions and temperatures.”

A wind chill of minus 25 (negative 32 degrees Celsius) can freeze skin within 15 minutes, according to the National Weather Service.

At least four deaths were linked to the weather system, including a man struck and killed by a snow plow in the Chicago area, a young couple whose SUV struck another on a snowy road in northern Indiana and a Milwaukee man found frozen to death in a garage.

Officials in large Midwestern cities including Minneapolis, Milwaukee, Chicago and Detroit were desperately trying to get the homeless off the streets.

Minneapolis charitable groups that operate warming places and shelters expanded hours and capacity, and ambulance crews handled all outside calls as being potentially life-threatening, according to Hennepin County Emergency Management Director Eric Waage. MetroTransit said it wouldn’t remove people from buses if they were riding them simply to stay warm, and weren’t being disruptive.

Emanuel said Chicago was turning five buses into makeshift warming centers moving around the city, some with nurses aboard, to encourage the homeless to come in from the cold.

“We’re bringing the warming shelters to them, so they can stay near all of their stuff and still warm up,” said Cristina Villarreal, spokeswoman for the city’s Department of Family and Support Services.

Shelters, churches and city departments in Detroit worked together to help get vulnerable people out of the cold, offering the message to those who refused help that “you’re going to freeze or lose a limb,” said Terra DeFoe, a senior adviser to Detroit Mayor Mike Duggan.

Nineteen-year-old Deontai Jordan and dozens of others found refuge from the cold in the basement of a church in Ann Arbor, Michigan.

Hundreds of public schools from North Dakota to Missouri to Michigan canceled classes Tuesday, and some on Wednesday as well. So did several large universities.

Closing schools for an extended stretch isn’t an easy decision, even though most school districts build potential makeup days into their schedules, said Josh Collins, spokesman for the Minnesota Department of Education.

“Many students, they might have two working parents, so staying home might mean they’re not supervised,” he said. “For some low-income students, the lunch they receive at school might be their most nutritious meal of the day.”

American Indian tribes in the Upper Midwest were doing what they could to help members in need with heating supplies.

Many people on the Standing Rock Sioux Reservation in the Dakotas live in housing that’s decades old and in disrepair, or in emergency government housing left over from southern disasters such as hurricanes.

“They aren’t made for this (northern) country. The cold just goes right through them,” said Elliott Ward, the tribe’s emergency response manager.

The extreme cold was “a scary situation” for the White Earth Band of Ojibwe, said Chris Fairbanks, manager of the northern Minnesota tribe’s energy assistance program.

“We have many, many calls coming in. We’re just swamped trying to get everybody what they need,” she said.

The cold was even shutting down typical outdoor activities. A ski hill in the Minneapolis area said it would close through Wednesday. So did an ice castle attraction.

The cold weather was even affecting beer deliveries, with a pair of western Wisconsin distributors saying they would delay or suspend shipments for fear that beer would freeze in their trucks.

The unusually frigid weather is attributed to a sudden warming far above the North Pole. A blast of warm air from misplaced Moroccan heat last month made the normally super chilly air temperatures above the North Pole rapidly increase. That split the polar vortex into pieces, which then started to wander, said Judah Cohen, a winter storm expert for Atmospheric Environmental Research.

One of those polar vortex pieces is responsible for the subzero temperatures across the Midwest this week. /cbb