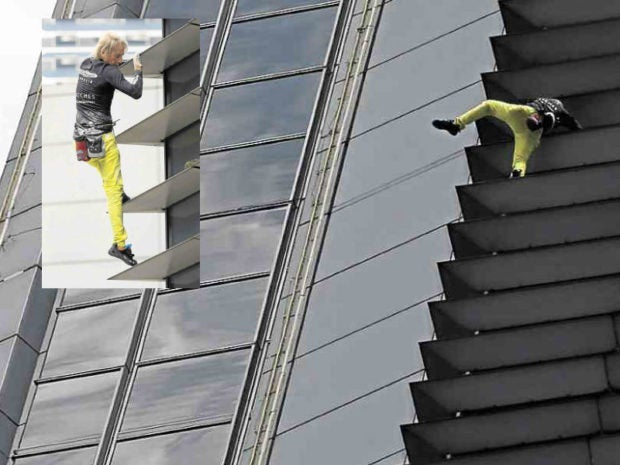 ‘SPIDER-MAN’ CONQUERS MANILA French urban climber Alain Robert hangs precariously as he deftly climbs with his bare hands the 47-story GT International Tower on Ayala Avenue, Makati City, before noon on Tuesday, leaving people below awestruck. As in his previous capers in other countries, the 56-year-old French ‘Spider-Man’ was later held for public disturbance. —LYN RILLON

French urban free climber Alain Robert was arrested by policemen on Tuesday after he scaled one of Metro Manila’s tallest buildings in his latest high-risk ascent.

Officers were waiting on the sidewalk as Robert, 56, descended from the 217-meter, 47-story GT International Tower on Ayala Avenue in the middle of the bustling financial district of Makati City.

The 56-year-old daredevil urban climber was charged with “climbing without permit” in the city prosecutor’s office with other forms of trespass (since he did not break into the building), and alarm and scandal.

Representatives of the building also went to the police station but did not disclose if they would be filing suit against him.

Still donning his sweaty black trekking long sleeves shirt and soiled bright yellow pants, Robert was all smiles when he was brought to the police station for his mug shot.

“It was a nice experience. Up there, I was telling to myself, I was not alone. Looking down, there are thousands of people cheering, they don’t want me to fall. They love me,” he said.

In love with Filipinos

Robert’s return to the country was set more than 20 years ago. Back then, he said Makati did not have as many high-rise buildings, but he “fell in love with the Filipinos, their language and the way they cheerfully talk.”

A few months back, another Frenchman who had been in the country urged him to go climb the office tower of GT International at the corner of Ayala and H.V. dela Costa.

A couple of pictures and videos and searching Google Earth, Robert told himself, “Why not? The building is pretty much tall and the shape looks interesting.”

Inaugurated in 2004, the building was a prominent feature in the Makati skyline thanks to its 10-story vertical fin crown.

Robert has a list of buildings he would climb, normally without harness and safety gear. When he arrived in the country on Friday, his eyes were already set on GT Tower, the ninth-tallest building in the country.

He said he also considered climbing the shorter RCBC Plaza Towers across the street but dropped the idea because “there’s no way I could climb the first few stories.”

Trump Tower Manila, the second-tallest building at 280 meters and 57 stories, was also an option but he said, “I’m getting old.”

Social media was abuzz of the then still unidentified man. One social media commenter called him “a lunatic man threatening to jump off to commit suicide.” Others who identified him as the one and only “Human Spider” called him “badass” for scaling a local skyscraper.

Local police responded to the scene around 11 a.m. with Robert already on the 30th floor. Fire trucks equipped with ladders and a cushion bag also arrived.

He reached the 45th floor around noon, scaling the tower’s window ledges equipped only with a camera strapped around his head, two fannypacks, one with a bottle of water and another with chalk dust to keep his hands dry.

He could not climb higher “because it was impossible, the top was flat.”

“I saw thousands of people inside the building and they were laughing and smiling. It’s like I am entertaining people in the city for free. People who don’t know each other are coming together because I am climbing,” he said.

Police said the commotion his stunt created stalled the traffic for several minutes along Ayala from Makati Avenue to Malugay Street.

“When I was climbing down, I made it as fast as I could to diminish public nuisance,” an apologetic Robert said.

He was able to reach the first floor around 12:30 p.m., beaming with a smile as he jumped into the cushion provided by the firemen.

He was not cuffed as he was brought to the nearby police station accompanied by his lawyer, Howard Calleja. They thanked the police and GT Tower management for “handling the incident professionally.”

He called the Makati police “the nicest cops ever,” comparing his experience two decades ago when he was beaten up by officers in Tokyo and Kuala Lumpur.

Robert has been climbing buildings and other structures around the world for the past 45 years without permit and often had run-ins with the authorities.

He had been arrested hundreds of times, including once for which he spent five days in jail in 2007 after scaling the 88-story Jin Mao Tower in Shanghai while dressed as Spider-Man.

Before his Manila stunt, he was arrested by London police in October last year for causing public nuisance when his climb at Salesforce Tower (formerly Heron Tower) stopped traffic in the city.

After every arrest, Robert is asked if he would stop his death-defying climbs. No, is his quick reply. “It’s my way of living. It’s like eating and sleeping. I needed this. It keeps me alive.”

Robert has been into the sport since he was 11. He called climbing “not just my passion, but also my philosophy in life.”

In 2015, he made a Guiness World Record for having the most buildings climbed after conquering 121 skyscrapers.

Among the notable landmarks he scaled were the tallest skyscrapers around the world such as Taipei 101, Petronas Towers in Malaysia, Empire State Building in New York and Burj Khalifa in Dubai.

In June last year, however, he was foiled when he attempted to ascend a Seoul skyscraper, getting more than halfway up the 123-story Lotte World Tower before security forced him to abort.

Robert has suffered several severe falls while climbing and estimates his accidents have left him 66 percent disabled. —WITH A REPORT FROM AFP