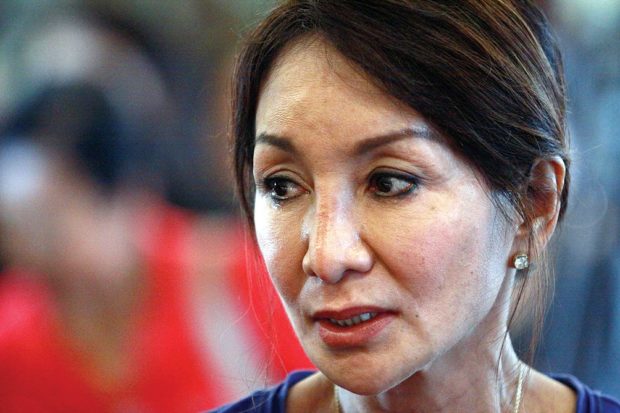 MANILA, Philippines — The Sandiganbayan has again denied the motion for reconsideration filed by Cebu Rep. Gwendolyn Garcia seeking to reverse a prior decision to continue the trial of her case for graft and technical malversation.

“At the onset, the allegations made by movant in support of its Motion for Reconsideration are mere lengthy reiterations of the arguments she interposed in her previous motions which have already been discussed and judiciously resolved in the assailed Resolution,” the decision, which was authored by Associate Justice Lorifel Pahimna, said.

The Second Division, composed of five justices, voted 3-2 to junk the motion.

Those who voted with Pahinma to dismiss Garcia’s plea were Associate Justices Oscar Herrera, the division chair, and Efren de la Cruz.

Those who voted to grant the plea were Associate Justices Frederick Musngi and Geraldine Faith Acong.

Garcia claimed that her right to speedy disposition of her cases was violated, because the Office of the Ombudsman took almost three years to finish its preliminary investigation, with inordinate delays brought by the prosecution.

The Sandiganbayan, however, found no violation of Garcia’s rights.

“This Court finds that there is clearly no violation of the movant’s constitutional right to speedy disposition of her cases as the time it took the Ombudsman to complete the investigation and the time the plaintiff has prosecuted the instant cases before this Court can hardly be considered an unreasonable and arbitrary delay,” the Second Division said.

“Further, there is nothing in the records to show that said period was characterized by a delay which was vexatious, capricious, or oppressive. Thus, her assertions that there was a violation of such constitutional right must necessarily fail,” the decision added.

Garcia is facing graft and technical malversation case due to a controversial purchase of a 24.92-hectare property in Naga City worth P98.93 million back when she was still governor of Cebu province.

Garcia submitted the motion to dismiss the case last year.

On Nov. 19, 2018, the Special Second Division denied it — with justices voting in the same manner — prompting her camp to submit a motion for reconsideration.