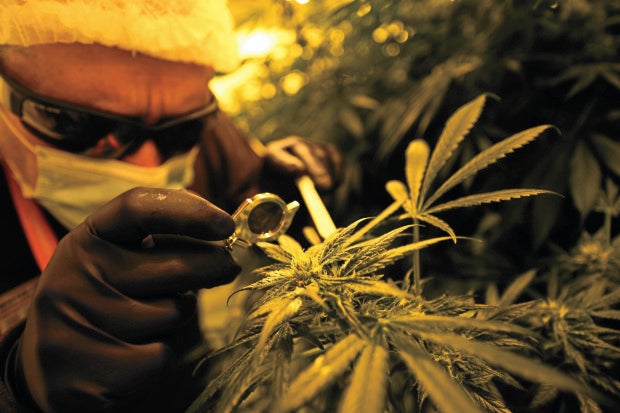 Scientists have found evidence to support marijuana use for medical purposes, such as relief from multiple sclerosis pain or combating nausea after chemotherapy.—AFP

MANILA, Philippines — The House of Representatives on Tuesday approved on third and final reading a bill that would legalize and regulate the use of medical cannabis (marijuana) and expand research into marijuana’s medicinal properties.

The lower House gave its final nod to House Bill (HB) No. 6517 with 163 votes. Five lawmakers voted on the negative while three lawmakers abstained during nominal voting.

The proposed law seeks to help patients suffering from debilitating diseases and mandates the Department of Health (DOH) and the Philippine Drug Enforcement Agency (PDEA) to regulate medical cannabis.

The proposed law would allow availability of medical cannabis to qualified patients with IDs to be issued by DOH. It also provides for qualifications of physicians and caregivers who can prescribe or administer medical marijuana.

Isabela 1st District Rep. Rodito T. Albano III, the principal author of the bill, earlier clarified the proposed law would not decriminalize the use of cannabis or marijuana, neither would it allow smoking.

HB 6517 also establishes an Advisory Committee on Medical Use of Cannabis, which would serve as the advisory body in the formulation and implementation of policies and regulations. It also provides penalties for the licensing and operation of Medical Cannabis Compassionate Centers and Medical Cannabis Research and Safety Compliance Center.

Once enacted into law, it would also authorize the University of the Philippines (UP) National Institute of Health, Health Sciences Center of the UP System, Philippine Institute of Traditional and Alternative Health Care, and other organizations to conduct research on the use of medical cannabis.