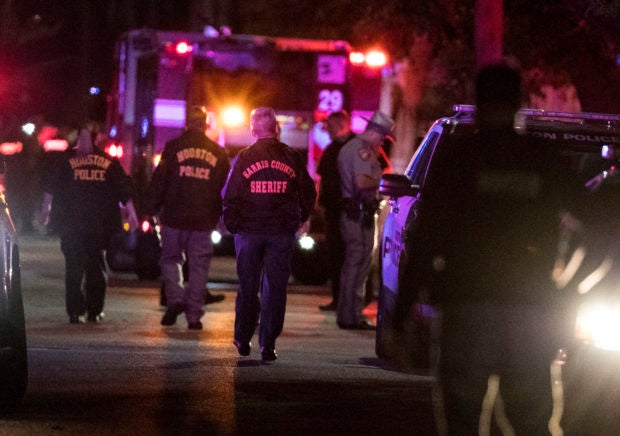 Police investigate the scene where several Houston Police officers were shot in Houston on Monday, Jan. 28, 2019. At least five Houston officers were injured in a shooting Monday in an incident involving a suspect at a residential building, police said. (Brett Coomer/Houston Chronicle via AP)

(Updated, 10:43 a.m.) HOUSTON —The Houston police said two suspects were killed after a shooting that injured five officers, including four who were hit by gunfire.

Houston Police Chief Art Acevedo said the suspects were killed after firing at officers serving a search warrant at a southeast Houston home where authorities alleged that black tar heroin was being sold.

Houston police tweeted the officers were “struck with gunfire following an encounter with the suspects” Monday afternoon in a neighborhood in southeast Houston.

Joe Gamaldi, president of the Houston Police Officers’ Union, tweeted that two officers were in critical condition and the other three in stable condition at Memorial Hermann-Texas Medical Center in Houston.

One of the officers was transported to the hospital by helicopter, Gamaldi said.

“Please keep them and their families in your thoughts and prayers,” he said.

A suspect was dead at the scene and SWAT officers were working to make sure no one else was inside the building where the shooting took place, police said.

Additional information on the suspect was not immediately available.

Both Turner and Police Chief Art Acevado went to the hospital where the injured officers were taken, but didn’t immediately comment to media there. They were scheduled to hold a news conference later Monday evening.

Texas Gov. Greg Abbott said the shooting was a “solemn reminder” of the service and sacrifices made by officers.

“The city of Houston and the Houston Police Department will have whatever state resources they need to bring swift justice to those involved,” Abbott said in a statement. /jpv