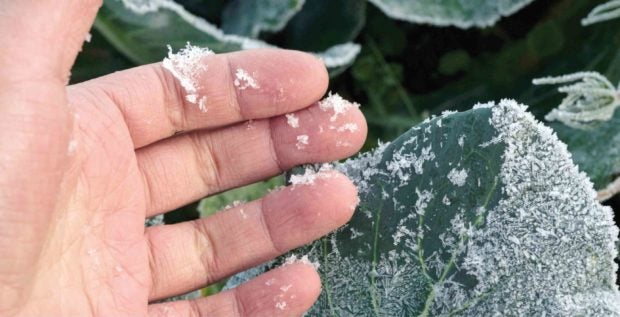 FROST BLANKET Frost covers sections of a cabbage farm at Sitio Englandad in Atok town, Benguet province, as temperature drops to 4 degrees Celsius there on Monday. Baguio City and other parts of Benguet are experiencing nippy mornings due to cold winds brought by the northeast monsoon. —NEIL CLARK ONGCHANGCO / CONTRIBUTOR

BAGUIO CITY — Frost covered vegetable patches in some villages in Atok town, Benguet province, as the Cordillera, including this city, reeled from dipping temperatures, but farmers there were unfazed.

The temperature in Atok, some 50 kilometers from this city, had been dropping in the last two weeks to as low as 4°C, a few notches below the 9.8°C experienced by Baguio on its coldest morning this year on Monday.

“No crops had been destroyed by the frost here in Atok,” said Cherry Sano, the town agriculture officer, adding that the frost was spotted in “less than a hectare only” at Sitio Englandad in Barangay Paoay.

“Farmers in Paoay know how to deal with the frost since it is an annual occurrence,” she said.

Sano said farmers refrained from growing potatoes from January to February since the crop was not resilient to the cold. “Instead of potatoes, farmers plant cabbage or carrots or do not plant at all in the affected areas,” she said.

The town is located in the highest point in the country’s highway system as part of Halsema Highway. It supplies most of the vegetable and flower needs of Metro Manila.

Sano said farmers had learned to cope by watering the plants to melt the frost before sunrise. This prevented the crops from wilting.

At Mount Santo Tomas, the highest point in Baguio City at 2,260 meters above sea level, the temperature registered at 7.2°C on Monday morning.

Wilson Lucando, weather observer at the Philippine Atmospheric, Geophysical and Astronomical Services Administration station here, said the drop in the mercury was caused by cold winds brought by the prevailing northeast monsoon, or “hanging amihan,” in Northern Luzon.

He said residents and visitors in Baguio should expect more nippy mornings until February when temperature could drop to 8°C.

Augusta Balanoy, manager of Benguet Farmers Multipurpose Cooperative, said they had received reports of frost incidents in small garden patches at Barangay Cada in Mankayan town and Barangay Madaymen in Kibungan town, both in Benguet.

Some vegetable gardens at Sitio Pactil in Barangay Sinto in Bauko town, Mountain Province, were reported to have also experienced frost.

“Frost has not covered an entire vegetable garden area. So if there is damage, it’s very minimal and will only affect a few farmers,” Balanoy said, adding: “There is no adverse effect on the province’s overall [vegetable] supply.”

No impact on prices

She also appealed to Metro Manila retailers not to use the frost incidents to increase prices of temperate vegetables.

Balanoy said daily volume of highland vegetables being shipped to different parts of the country had reached 1.5 million kilograms this year from the 1.2 million kg last year.

The plunging temperature attracted visitors to this city, days ahead of the opening of the crowd-drawer Panagbenga Festival on Feb. 1.

Louisa, a Baguio souvenir vendor at Wright Park here, said her sales in the past days increased as tourists continued to flock to the popular destinations. 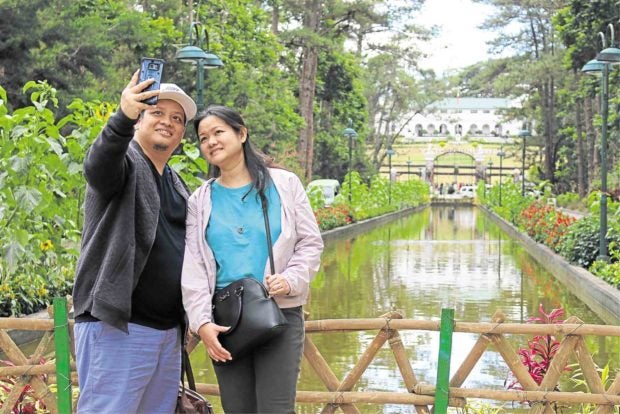 “It was really cold this morning, but we’re used to it so we come prepared with hot coffee,” she said.

But some tourists were still surprised at the sharp drop in temperature.

Noemie Bautista, a resident of Bulacan province, described her morning shower as an “ice bucket challenge,” referring to the popular online campaign involving the dumping of ice and water over a person’s head.