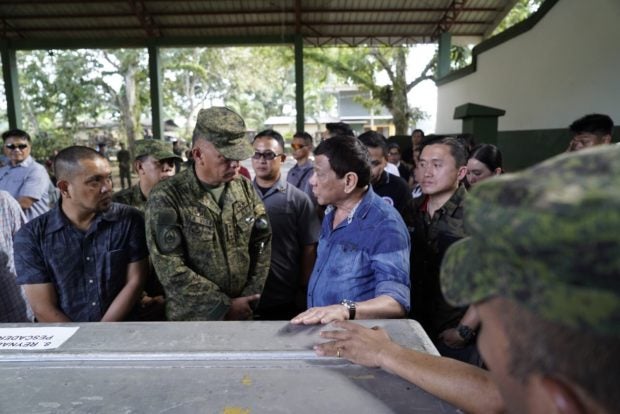 President Rodrigo Duterte talks with Lt. Gen. Arnel dela Vega, chief of the Western Mindanao Command, on Monday, Jan. 28, 2019, during his visit to Jolo in Sulu, a day after two successive explosions hit the Cathedral of Our Lady of Mount Carmel. (Photo by CHRISTOPHER GO)

ZAMBOANGA CITY — President Rodrigo Duterte on Monday ordered the military in Sulu to wage an all-out war against terror groups, after the twin bombings at a church in Jolo on Sunday that killed at least 20 people and wounded 78 others.

Col. Gerry Besana, public affairs officer of the military’s Western Mindanao Command, said the President gave the order during his visit to Jolo to see for himself the death and destruction from the bomb explosions at the Cathedral of Our Lady of Mount Carmel and to visit some of the survivors.

“Basically, his marching order was all-out war [against] the terrorist groups. Run after those mass murderers and give justice to their victims,” Besana told the Inquirer.

The first bomb ripped through the cathedral as Mass was being celebrated on Sunday.

The second bomb went off at the parking lot in front of the cathedral as security forces were responding.

Jolo Mayor Kherkar Tan, citing a report from the municipal police, said on Sunday that the explosions killed 25 people and wounded 81 others.

But Besana told the Inquirer on Monday that the military officially counted 20 people killed and 78 wounded.

“This is the official count as of Monday morning,” Besana said.

The Islamic State (IS) jihadi group in Iraq and Syria claimed responsibility for the attack through its news agency Amaq, describing it as twin suicide bombings that it said killed 120 people.

But the IS claim could not be independently verified and Philippine authorities were looking at the Abu Sayyaf bandit group in Sulu as the primary suspect.

Speaking to reporters in Jolo on Monday, Año said law enforcers were not discounting the political angle in the attack, because it happened just after the nation’s Muslim minority approved a law that establishes a larger and more powerful autonomous region for them in Mindanao.

But the primary theory of investigators, he said, is that the bombings were carried out by a terrorist organization such as the Abu Sayyaf or the Dalwah Islamiyah.

Año, a former chief of staff of the Armed Forces of the Philippines, said the attack was similar to the bombing at a military checkpoint in Lamitan City, Basilan province, on July 31 last year that was attributed to the Abu Sayyaf.

Speaking at the same news conference, Director General Oscar Albayalde of the Philippine National Police said the gap of just seconds between the two blasts indicated the bombs were set off electronically, similar to the Lamitan explosion that killed 11 people.

Albayalde said the type of bomb used in Sunday’s attack had yet to be determined. But going by parts recovered, he said galvanized iron sheet similar to the material used in building jeepneys was used in making the explosive device.

“It was probably as big as a 2-kilo container of powdered milk. No shrapnel had to be used because the GI sheet [itself served as] shrapnel,” Albayalde said.

The PNP chief said investigators had a suspect, caught on security camera in the cathedral, but he added the attack was likely planned and carried out by a group.

Albayalde said no evidence had been found to indicate that the attack was a suicide bombing.

Año said the perpetrators were likely after mass murder of civilians, particularly Christians.

“When there is a religious [angle like that], it’s [usually] allied with [IS],” Año said.

The Abu Sayyaf has pledged allegiance to IS, although the military says the move is more for propaganda to win support rather than actual alliance.

The military’s Besana said the Ajang-Ajang group, which also pledged allegiance to IS, was a suspect in the twin bombings and it may have carried out the attack to spoil the peace process in Mindanao.

“Ajang-Ajang” is a Malay term that means “aping” but it has come to mean “Soldiers of the Martyrs,” a subgroup composed of fathers and brothers of killed Abu Sayyaf fighters, said Rommel Banlaoi, chair of the Philippine Institute for Peace, Violence and Terrorism Research.

Albayalde said the authorities were also looking at possible “security lapses,” as the cathedral had been receiving threats and actually attacked in recent years.

He said police had been posted around the cathedral and military troops had been assigned to the “inner perimeter” and at the gates.

“It’s very unlikely you can just enter with a bag without being noticed,” he added.

The Associated Press (AP) reported that a government official had told it that an Abu Sayyaf commander, Hatib Sawadjaan, was a suspect.

At least four of Sawadjaan’s men were filmed by security cameras near the bombed area, AP said, quoting the official who had spoken on condition of anonymity.

Sawadjaan is based in the jungles of Patikul town, near Jolo, and has been blamed for kidnappings for ransom and beheadings of hostages, including two Canadian men, in recent years.

Jolo’s Mayor Tan said police were looking for four young men—possibly the same men mentioned in the AP report—
filmed by security cameras going into the cathedral before the bombs went off.

“There are four young men in their early 20s in civilian clothes who entered the church and left when people started getting inside the church. Few minutes later, the church exploded,” Tan said.

Jolo has been put on lockdown following Sunday’s deadly attack.

“People are advised to stay home if they don’t have business downtown. This is to cordon, sanitize and locate the culprits in the bombings,” Panglima Estino Mayor Ben Estino told the Inquirer on Monday.

Estino said even telecommunication was being regulated.

“There are certain periods when the signal is down, especially after the incident. We support this measure because someone has to answer for what happened,” Estino said.

Gov. Mujiv Hataman of the Autonomous Region in Muslim Mindanao said the regional government was raising funds to help the families of the victims. —With reports from Bong Sarmiento, Jeoffrey Maitem, and the wires