But ‘caring institution’ is plagued by limited funds and other problems, including overcrowding
By: Patricia Denise Chiu - @inquirerdotnet
Philippine Daily Inquirer / 05:03 AM January 28, 2019 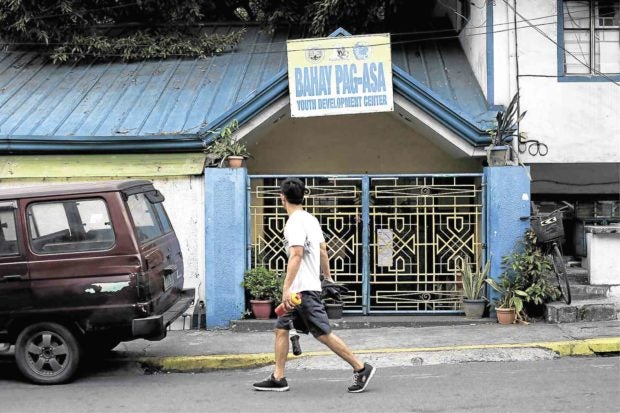 HOUSE OF HOPE The Mandaluyong Bahay Pag-asa is just one of eight centers nationwide that have fully complied with the Juvenile Justice Welfare Act. —RICHARD A. REYES

Small, scrawny and looking younger than his 14 years, Janmark (not his real name) is one of several children in conflict with the law staying at the two-room Bahay Pag-asa in Mandaluyong City.

He ended up there after he was busted for using marijuana earlier this month.

Already, Janmark has a couple of bruises to show for his three-week stay at the center.

“When I was asleep, one of the older boys punched me so hard on my thigh that I woke up twisting and screaming in pain,” he told the Inquirer.

His experience puts in doubt the claims of proponents of the bill lowering the minimum age of criminal responsibility (MACR) to 9 in the House, and to 12 in the Senate. For them, rehabilitation centers are better than jails where youthful offenders may be exposed to adult criminals.

Under Republic Act 10630 or the Juvenile Justice and Welfare Act (JJWA), all local governments are required to have a Bahay Pag-asa, which is a 24-hour “caring institution” for children aged above 12 but below 15, who have pending cases in court.

But data from the Child Rights Network show that of the 114 required centers, only 58 are operational as of November 2018. Of the 58, only eight have fully complied with requirements set by the law.

The Mandaluyong Bahay Pag-Asa, one of the eight accredited centers, is plagued by funding problems and the occasional overcrowding.

The small center is mostly bare and the boys committed there sometimes eat their meals on the floor due to the lack of tables and chairs. At night, they sleep on thin mattresses on the floor.

Exits are padlocked at all times, with nine security guards taking turns in three shifts.

The center, which can accommodate only up to 15 children with cases and five children at risk, currently houses 14 boys aged 13 to 19. Their offenses range from drug abuse to theft and murder.

But the sole social worker assigned full-time to the center and who asked not to be named said the center often had to take in up to 35 boys despite the lack of space.

Janmark, who admitted to using marijuana, blamed his peers for influencing him. “I was 12 when I started,” he said.

His parents separated when he was an infant, leaving him in the care of his grandmother who ran an extended household of 19 people. Two other siblings were sent to the province, while his parents already had their own families.

“Majority of the boys we receive are estranged from their immediate family. They’re either staying with relatives or have left home of their own volition,” the social worker said.

Should the bill to lower the criminal age pass, Janmark could possibly land in jail with adult criminals instead of being exposed to programs that would allow him to be reintegrated into society, she said.

“The bill shouldn’t be passed. These are children and should be treated as children,” said Arlene Gampal of Mandaluyong’s City Social Welfare and Development office.

Both she and the social worker agree that the current law is sound but lacks proper implementation.

Police sometimes bring children below age 12 to the center even when the law prohibits their detention, they said.

“There’s a huge risk that they will be bullied by older children here,” the social worker said, adding that the youthful offenders were usually sent to the city’s Bahay Tuluyan, a center for at risk and abused girls.

“In a previous news conference, Human Rights Commissioner Leah Tanodra-Armamento had also said that putting children in conflict with the law and kids at risk in just one facility was not advisable.”

When Janmark’s drug test came back positive, his grandmother said he could not come home without first going through rehabilitation.

But as the Bahay Pag-asa is not being a drug rehab center and national rehab are already overburdened, Janmark is left wondering when and where he will be transferred.

“I’d rather go to the province where my siblings are, or go back to the street, or sleep with friends,” he said.

Hopefully, he can appeal to his grandmother not to make him go to a rehab center, he said. When that fails, Janmark said he was thinking of escaping from the center and rejoining his friends.

It’s a common response to the fear of the unknown and the longing for freedom, said the social worker.

“This is why diversion programs are very important. We try to teach them to love themselves…. We try to nurture their dreams. But we can’t do it without the support of families and the government,” she said, adding that jailing young offenders is equivalent to writing off their future.