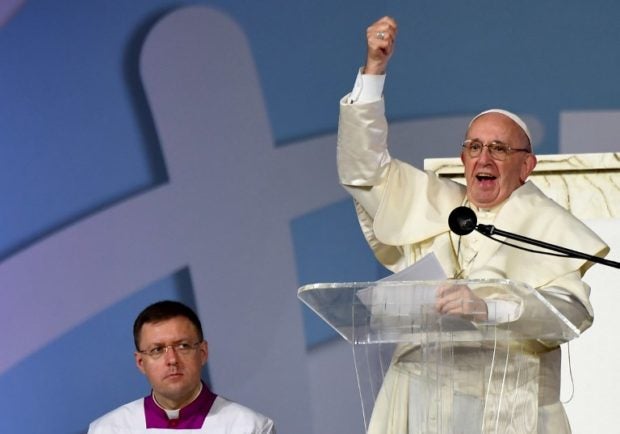 PANAMA CITY — Pope Francis called on hundreds of thousands of young pilgrims in Panama on Saturday to reject the temptation to live their lives online, and get involved in their communities.

Life was not “in the cloud, waiting to be downloaded, a new app to be discovered, or a technique of mental self-improvement,” the 82-year-old pontiff told a massive vigil at the World Youth Day gathering.

“It is not enough to be connected all day long. To feel respected and asked to get involved, is greater than simply being online,” Francis said at the vigil, held at a park outside Panama City.

He urged them “to embrace life as it presented itself,” and look for areas where “with your hands, your heart and your head, you can feel part of a larger community that needs you and that you yourselves need.”

The pope arrived in his Popemobile and choir of hundreds swaying and clapping pilgrims welcomed him onto a vast multi-tiered stage amid a sophisticated light-show.

The World Youth Day organizers said 600,000 were massed at for the slickly produced vigil, with music, dance and periods of quiet contemplation.

Speaking at length about young people’s difficulties in finding meaning in their lives, he said many young people often feel “invisible” — “rootless and parched without work, without education, without community, without family.” Going off script momentarily, he added: “These four withouts kill”.

Mary, the mother of Jesus, was a “young woman of Nazareth and was not on the social networks of the time. She was not an influencer, but she became the most influential woman in history,” he said to wild cheers.

Francis is no slouch on the internet himself, with more than 44 million followers on Twitter in accounts in nine languages and 5.8 million on a single Instagram profile.

The pope winds up his five-day visit to Panama for World Youth Day with a giant open-air mass on Sunday.