Late last year, two major leaks on social media helped expose the violence and discrimination seething in the underbellies of two of the country’s top educational institutions: the University of the Philippines and Ateneo de Manila University.

The issue at UP was rooted in Upsilon Sigma Phi’s commemorative Facebook post for its “most prominent and controversial” member’s 101st birth anniversary. “Even until now the Philippines remains divided on the subject of Ferdinand Marcos, a man who left an indelible mark on our country,” the fraternity wrote.

The post was carefully worded, skirting the dictator Marcos’ legacy and touting instead, among other things, his academic excellence. “Though he remains a polarizing figure, his place in history cannot be denied, and those who do not learn from the mistakes of the past are doomed to repeat them,” Upsilon said.

Indignant, sociologist Athena Presto called out the frat for “fence-sitting,” saying: “Surely there is a special place in the deepest bowels of hell [for] supporting the devil yet claiming innocence at the same time.”

Her stinging tweets were screencapped and posted in a private Facebook group chat among supposed Upsilon 2017 rookies. “Of course she’s dumb. She’s a woman,” read one message from an unnamed sender.  “If she was really smart, she would have had the intelligence to choose male as her gender when she was in the womb.”

“Who’s her boyfriend [in Upsilon]?” another said. “Maybe he isn’t banging her enough; that’s why she’s acting out.”

But the attacks on Presto were but a flash in a 2,000-page thread of violent and crass slurs against women, LGBTQs, “lumad” and Muslims. 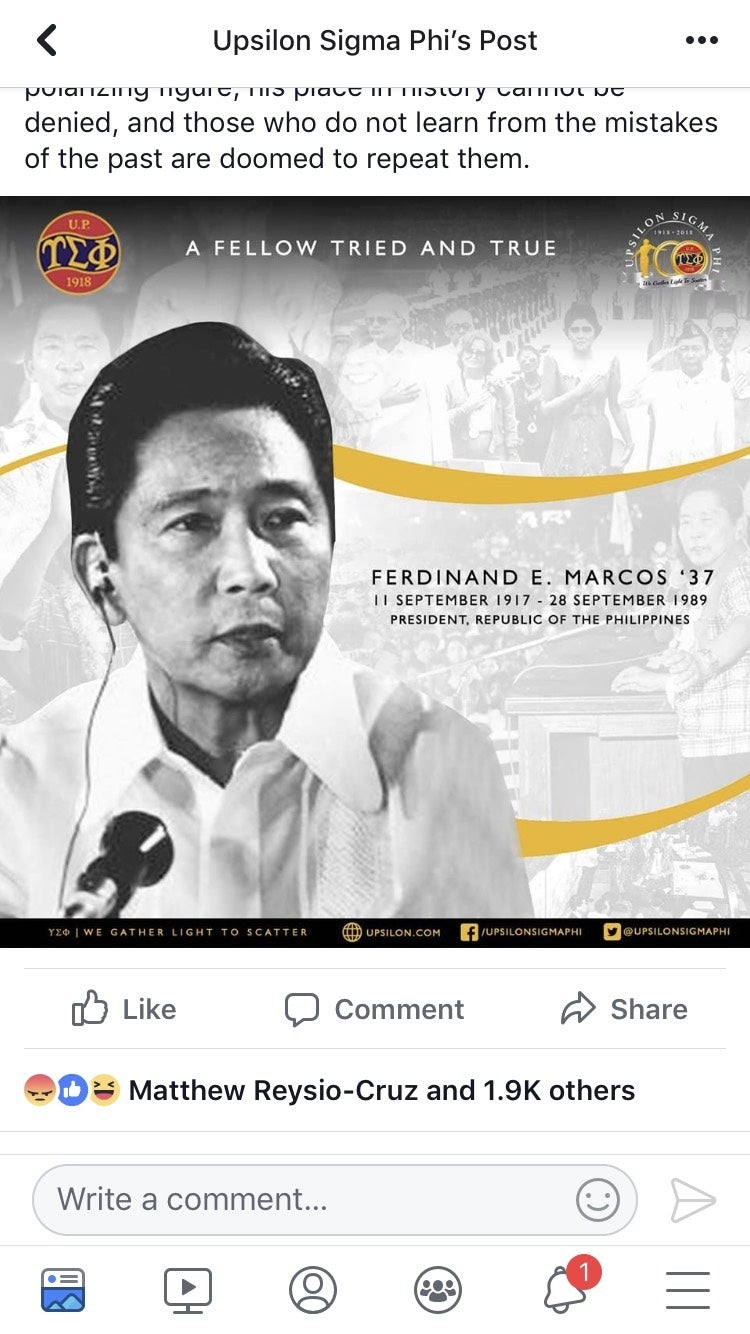 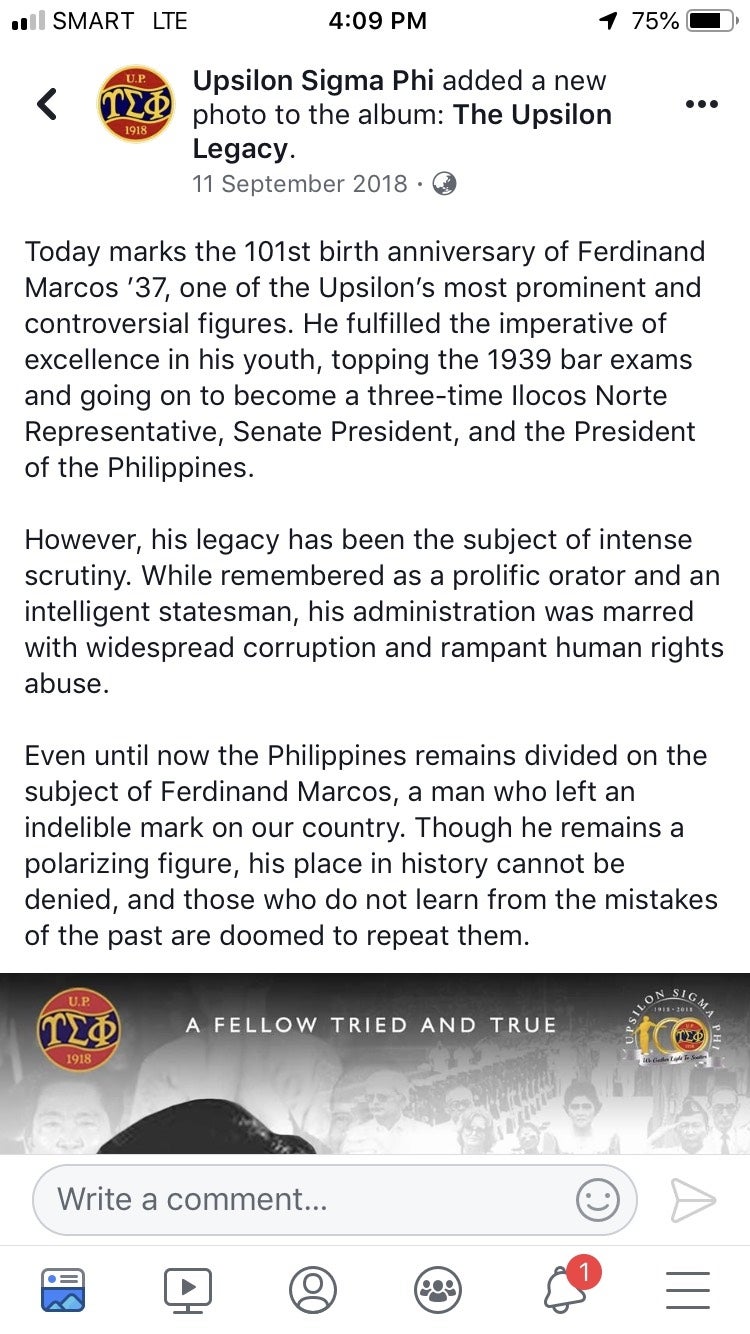 CAREFULLY WORDED The controversial Facebook post of Upsilon Sigma Phi about its “most prominent and controversial” member. A sociologist called out the fraternity for “fence-sitting”—and ended up being a target of misogynist slurs in a private social media chat room, later exposed as the “LonsiLeaks.” —FROM THE UPSILON FACEBOOK PAGE

“It’s alarming and offensive to read remarks you would never expect a sane person, let alone educated men, to make,” said Presto, also a lecturer at UP. “Everyone you need to protect, everyone already discriminated against—these were the people who were hammered.”

Thus, #LonsiLeaks became a rallying cry to hold the oldest, most influential fraternity in the country accountable for promoting hate speech and fear.

A few days prior to the leaks, a violent car chase and an altercation caught on CCTV ensued among members of Upsilon and another frat, Alpha Phi Beta (APB)—incidents that, according to UP Diliman vice chancellor for student affairs Jerwin Agpaoa, violated the UP Code of Student Conduct.

Agpaoa said UP had filed two administrative charges against the frats and the members involved in the violence.

Section IV.1.3.1.a. of the UP Code states that students may be held liable for “creating and/or engaging in disorder, tumult, breach of peace, or serious disturbance such as, but not limited to, rumbles, within the University premises, resulting in harm to persons.”

Agpaoa said charges were filed a month later against some of the identified members in the group chat at UP’s Office of Antisexual Harassment for their homophobic and misogynistic remarks.

University Student Council chair Kisha Beringuela said summonses were expected this semester; those found culpable could be slapped a 40-day suspension at the very least.

Over at Ateneo, a 14-year-old junior high school student caught on video beating up a classmate in a toilet on campus was dismissed last December. Ateneo officials said the video “depicts an evident act of violence that constitutes a serious violation of disciplinary misconduct” and the university’s codified standards of discipline.

Early this month in an exclusive interview with GMA News, the dismissed student and his mother issued a public apology, but claimed that the violence had been provoked.

Children’s rights groups maintained on the other hand that Ateneo had the responsibility to ensure that such acts of peer violence would never be tolerated on campus by strictly enforcing antibullying policies.

Both UP and Ateneo have promised to, among others, introduce gender sensitivity seminars and strengthen antibullying campaigns in order to prevent similar occurrences.

But while Ateneo swiftly managed to hold an individual perpetrator accountable, the UP administration may need a more structural approach to deal with powerful organizations on campus.

“Investigations are rolling for the leaked chat convo, the rumble and car chase, but it would take a good three months before we can finalize these cases,” Agpaoa said.

He cited factors that could influence the conduct of the investigations, such as the witnesses’ cooperation, the frats’ code of silence, and the presence of solid evidence against the perpetrators.

UP Diliman chancellor Michael Tan had earlier urged the frats “to take stronger and quick action to root out the scalawags in their ranks and to administer disciplinary action, without prejudice to UP’s administrative action.”

Upsilon promised in a statement to “unconditionally cooperate [not] only in gathering facts but [also] in ensuring accountability consistent with the dictates of due process.” But according to Agpaoa, Upsilon has yet to provide updates on its internal inquiry into the leaks, including verifying the veracity of the information from the complaints.

For UP professor and sociologist Sarah Raymundo, seeking justice and accountability does not stop at managerial solutions. The problem is both political and cultural, she said.

In UP’s case, social media brought to the surface what institutional corrections or reforms should be done, Raymundo said.

“But the problems of sexism, misogyny and discrimination are not solvable by the law,” she said, adding: “What it reveals is a deadlock of society: You know what is wrong, but you can also see the limitations of existing rules and laws. Everybody [in the UP community] was offended, but current institutional measures would not suffice, so a political vacuum was created.”

While UP has for decades been struggling with frat-related violence, the LonsiLeaks made the university community realize that its shared values were being threatened even in social media, Raymundo said.

She said the issue had pushed the UP community to condemn misogyny, the marginalization of national minorities and activists, sexism, and a “macho-feudal” culture.

“It was a criticism of toxic masculinity, combined with this whole notion of power and privilege being reproduced in a university, which is supposed to be transformative,” she said.

This “toxicity,” according to Raymundo, is deeply rooted in UP’s role in reproducing privilege—a system that thrives in a culture of hierarchy that divides students between those who belong to prestigious organizations and those in the so-called minorities in schools.

The proper solution to UP’s dilemma may not be abolishing fraternities, but acknowledging how violence is deeply rooted in political and economic structures both inside and outside academic institutions, she said.

“[This culture] does not only exist in UP; this is the kind of stuff we’ve been reading about elsewhere, like the #MeToo movement and President Duterte’s misogynistic statements. What it exposes is the [lack of] capacity of the institutions to come up with reforms [in addressing these issues],” Raymundo said.