Comelec: No discrepancy in Cotabato’s number of votes for BOL 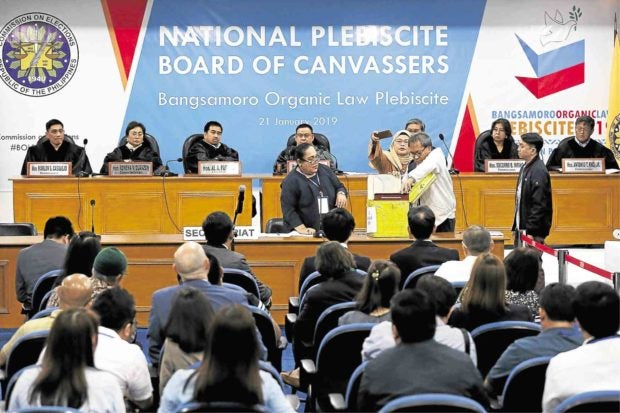 FIRST IN Canvassers on Thursday open a ballot box containing returns from Cotabato City, the first to be received by the Commission on Elections at its Manila headquarters. The returns will be tabulated to correct a “clerical error” that misstated the total number of voters in Cotabato City. INQUIRER file photo / RICHARD A. REYES

MANILA, Philippines — No discrepancy has been been found by the audit and tabulation panel between the Certificate of Canvass (COC) and the Summary of Statement of Votes (SSOV) in Cotabato City, the Commission on Election (Comelec) announced on Friday.

According to Comelec secretariat Atty. Consuelo Diola, the number of votes for “yes” or “no” in the city of Cotabato stated in the COC is the same with what was written in the SSOV.

However, Diola noticed some discrepancy between the two documents concerning the entry on the number of registered voters who actually voted in Cotabato.

The session was placed on recess for 10 minutes in order for the the National Plebiscite Board of Canvass (NPBOC) to discuss the matter.

Upon deliberation, Comelec Chairman Sheriff Abas said that the number of those who actually voted for the Bangsamaro Organic Law plebiscite is hereby ordered as a “formal defect,” meaning it would not affect poll results.

Cotabato City voted for yes for the inclusion of the city in the Bangsamoro Autonomous Region in Muslim Mindanao.