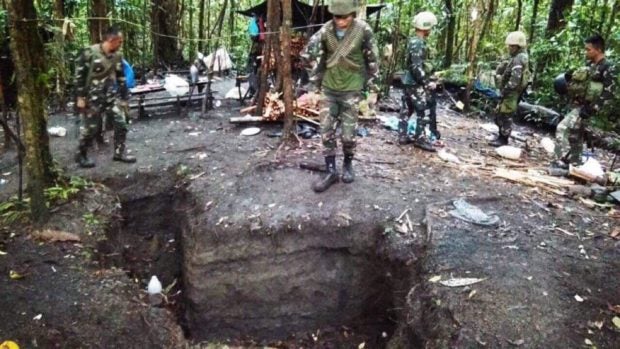 Col. Romeo Brawner Jr., commander of the 103rd Brigade, told Radyo Inquirer that they seized control of the camp located at the hinterlands of Sultan Dumalondong town early Friday.

The rebels were led by Abu Dar, the current leader of the Dawlah Islamiyah, formerly known as the Maute-ISIS Group.

Brawner said the rebels have escaped and security forces are currently pursuing them.

The takeover of the camp came before the assault of government troops against the remnants of the Maute-ISIS on Thursday.

Three soldiers who were wounded from the fighting are now in stable condition, Brawner said, claiming that three armed men were killed.

Sultan Dumalondong is located about 50 kilometers from Marawi City, where ISIS-inspired terrorists laid siege to the city for five months in 2017.

Brawner urged the residents not to panic from the tension because they are in control of the situation.

Read Next
LOOK: PNP officials lay wreath at SAF 44 memorial
EDITORS' PICK
Beyond the Chocolate Hills: A farm-to-table, heritage culinary adventure of Bohol
MyCitiHomes premiers PH’s first 3-star certified BERDE District residential development
‘Crash Landing on You’ couple confirms pregnancy
Enrile contracts COVID-19: ‘To my critics and enemies, I am not going to die yet’
Metro Manila’s COVID-19 positivity rate jumps from 3.9% to 5.9% — OCTA
House energy committee chair Arroyo bats for cheap electricity
MOST READ
Enrile contracts COVID and snipes at critics, foes: ‘I am not going to die yet’
Duterte: It was correct for Bongbong Marcos to ‘decline’ presidential debates
Russia steps up missile strikes on Ukraine as G7 leaders gather
PH firm partners with US corporation to set up weapons assembly in Bataan
Don't miss out on the latest news and information.