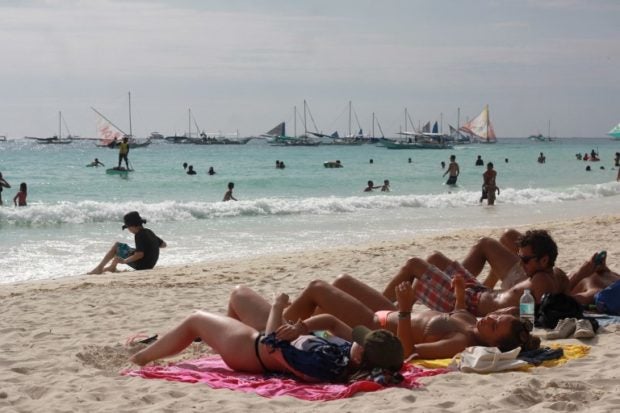 Tourists relax along a beach on Boracay Island in Malay town, Aklan province, central Philippines on April 7, 2018.  (Photo by AFP)

MANILA, Philippines — The Philippines welcomed a record 7.1 million tourists to its beaches and dive spots in 2018, despite its most famous resort Boracay being shut half the year to recover, authorities said Thursday.

The archipelago nation of over 7,000 islands saw the number of visitors jump by nearly eight percent over the previous year, with South Koreans leading the way as its top tourists.

This growth came without much help from Boracay, which was closed for clean up from April to October after President Rodrigo Duterte branded it a “cesspool” fouled by reckless development.

Before the closure, the tiny island’s white sand beaches and turquoise waters were seeing some two million sun worshippers a year.

Other spots like natural paradise Palawan and beach destination Siargao Island saw a jump in foreign tourists during the closure.

While South Korean led the pack with 1.6 million tourists, Chinese arrivals jumped by nearly 30 percent over 2017 to hit 1.3 million, the department of tourism said.

Americans visitors were at one million.

“We are now in a time in need of vigilance – a dedication to the principle of a sustainable and inclusive tourism industry,” Puyat said. — with reports from Christia Marie Ramos, INQUIRER.net  /je/kga